I'm translating a Spanish gravestone from 1865 and I am stuck on one word. The inscription includes a verse or prayer that begins with the word "Onava." I can't find this word in any of my Spanish dictionaries. I've looked very closely at the inscription and I am confident that the spelling is "Onava." I'm wondering if it is a misspelling of "Orava" which could be a phonetic spelling of "Oraba" meaning "Prayed." However, I'm wondering if it could be an archaic Spanish word and my (very basic) Spanish is limited to the contemporary language. Google came up with nothing. Does anyone know?

The full text of the inscription, with my translation:

A los deudos que lo lloran. [to the bereaved who weep for him.] 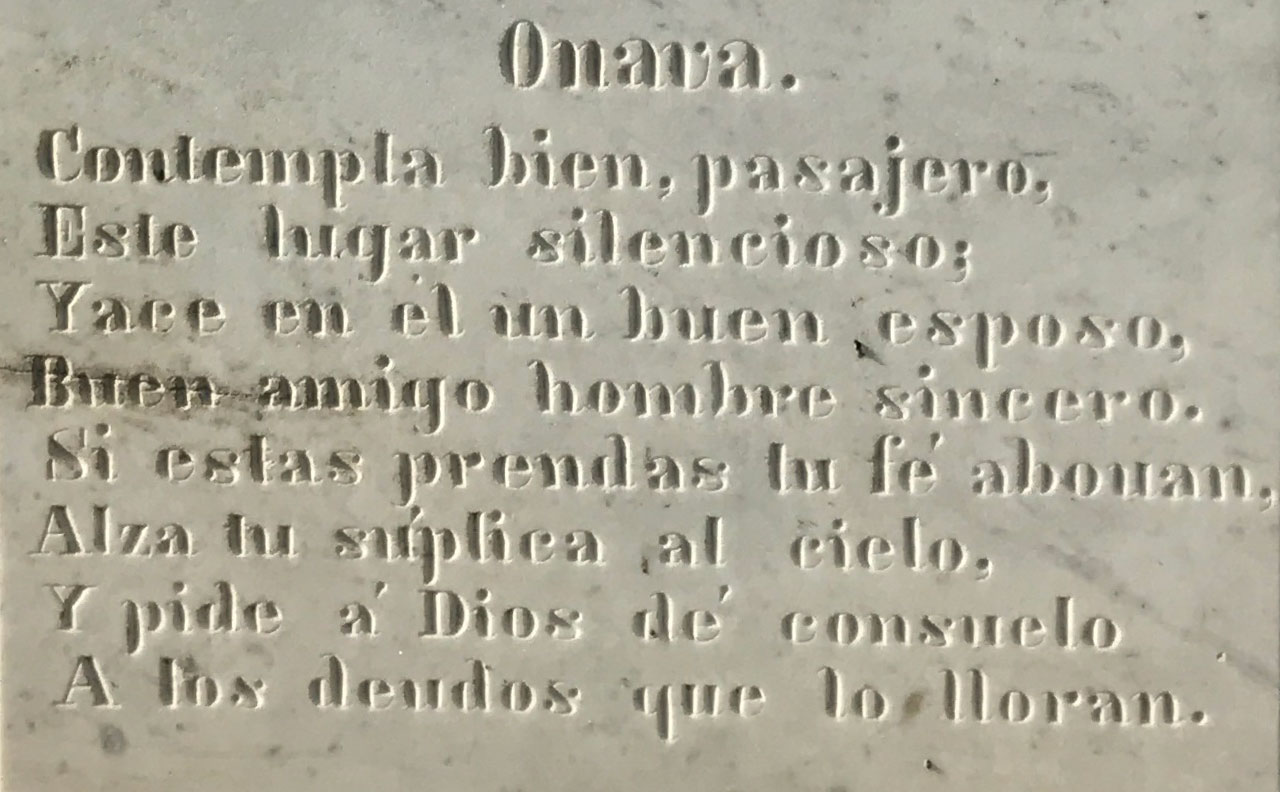 Note: You can see the complete gravestone here.

Just to leave all the comments written in an answer, let's start this community wiki post. First of all, you can find information about Simon Mesa's grave in the web Find a grave. There you can find other pictures and information about relatives. Neither the wife nor the daughter carry the name "Onava", although it seems to be a surname used there, you can find some companies like "Aluminios Onava" or even a real state agency. Another theory is that it could be the name of a plant, you can find the word onava in the Fichero general from the RAE web, a single file will tell you that it referred to Ehretia virgata or Ehretia acuminata. A wild guess would be that it is a misspelling of the word octava, as the following poem is indeed a composition of eight verses. The composition transcription is as follows:

The reason to write abonan is that it seems that sometimes the n was written with a u as in the word consuelo right at the end of the previous text.

On the other hand, we don't usually accept translations from Spanish into English, but given that you have already provided an attempt of translation, let's try to make some amendments:

Behold, passerby,
This silent place;
Here lies a good husband,
Good friend, sincere man.
If these goods1 make your faith grow,
Send your prayers to the Heavens,
And ask God that He may give comfort
to the family that weeps for him.

If you think the translation can be improved, please make any further corrections to avoid misinterpreting any word from Mexican Spanish.

1 Spanish prenda can be translated as "jewel" given the translation offered for Mexico in the Diccionario de americanismos. Nonetheless, the Spanish dictionary also states that prenda may mean "something given as proof of something". So the translation could also be "if these proofs...". I (Charlie) made the decision of translating it as "goods" as a middle point between "proof" and "jewel", given that the man was described both as a "good husband" and a "good man", hence the "goods".