Are there consistent rules for pronouncing "c" and "g"?

I want to write a software program that will "Americanize" the pronunciation of Spanish text (using Mexican pronunciation) so that it is easier for English speakers learning Spanish to be reminded of how to pronounce the words.

For others (vowels, for instance) the equivalent sound is consistent.

But in a couple of cases, the letter can be pronounced differently (c and g).

Here is what I have in mind (remember, Mexican pronunciation of Spanish is what I'm looking for):

Are there any rules I could build into the software that would enable me to know when "c" is to be pronounced as "s" and when as "k"?

Similary, are there any rules I could build into the software that would enable me to know when "g" is to be pronounced as "g" and when as "h"?

Some time later, I wrote a programming tip that incorporates some of this knowledge in A Snippet that Transforms Spanish Text into Simple American English Phonetics.

When a C or G is followed by either an I or E, then the pronunciation changes.

This can present a problem when a new Spanish learner is trying to spell.. If you are looking to create the sounds Gay and Ghee, then you will need a u

The letter C will require the use of Qu

Additionally, if you want to actually pronounce the u, then you need only put a dieresis as Emilio pointed out in the comments.

In the end, you have a table like this to use as a cheat sheet.

When C is followed by E or I, the C is pronounced as [θ], similar to English th in think [θɪŋk].

When G is followed by E or I, the G is pronounced as [x]. This is identical to the letter J. I don't know an English example but if you're familiar with German, it's similar to the pronunciation of ch in Bach [baχ].

If there's a U between G and E or I, respectively, the pronunciation is [g]. The U is not pronounced.

If the U should be pronounced as well, it is written Ü. It does not affect the pronunciation of G further and the rules given above are applied.

Note, in some regions the pronunciation may differ.

1 Note that [ɣ] and [g] are allophones. The differences is too little to be distinguishable and you can consider them to be phonemically the same. An Example in English would be the t sound in hit, tip and little.

(*) Hypothetical, I don't know any words in Spanish that have -guu-, but there may be one or two out there.
(⁑) Imported words maintaining their original orthography can use ze, zi, but pronouncing them as ce/ci.

Notice how the E/I columns appear to be shifted down a row, with je/ji being completely redudant in modern Spanish

Letter “C” has three different sounds, depending which letter comes next.

Yes, they are pronounced as follows (for seseo speakers replace the /θ/ with /s/): 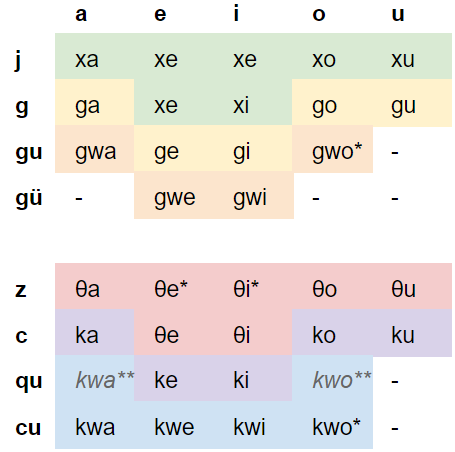 ** qua, quo only appear in some set Latin phrases and unnativised English loanwords:

And the letter Y is pronounced as J when followed by vowels for example:

and other cases as EE:

Note: Someone said that G is pronounced as W, yes, but that's because sometimes spanish speakers hear diptong with U and GU as the same sound, we can hear the difference but when speaking we don't notice that.

6
Exception to the Phonetic Rule
5
If certain words undergo a spelling change from "z" to "c" in order to preserve the soft sound of the "z," is there a "hard z" in Spanish?
1
How to predict the pronunciations of loanwords?

36
Are there other words in Spanish that can't be written? (like sal-le)
9
C as K and S and silent (rules of thumb for pronunciation of C?)
2
How do you say "Braille" in Spanish?
5
Translation Golf XVII - "We rule the world"
16
How should I pronounce programming language names (like "Java") and technical terms (like "JSON") in Spanish?
7
Do Mexicans still pronounce the "x" in any Nahuatl place names the Nahuatl way?
5
What are the pronunciation rules for Castilian Spanish?
9
Do any dialects of Spanish still pronounce "h"?