I am really curious to find out what specific features define the Spanish spoken in various parts of Mexico. Maybe not every single state but a more or less broad classification of Mexican dialects. I am looking for something similar to how American English is broadly classified into Southern, Yankee, Appalachian, Midwest, Valleyspeak, etc.

méxico dialectos
Share
Improve this question
edited May 27 '14 at 18:30

If you are referring specifically to Spanish dialects, and not indigenous or native-american tongues, which then I would say there are 3 different "accents" and one dialect.

The northern accent tends to be harsh and blunt, spoken loudly and with an overly grand emphasis on the last syllable of words and sentences. 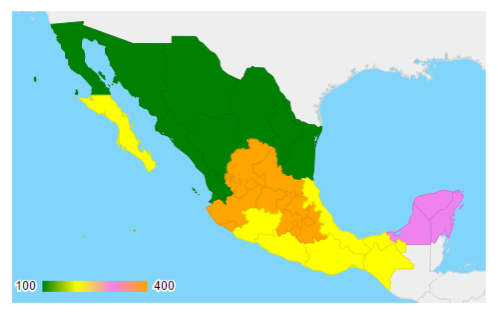 Then we have the Central Accent, which you can hear in Jalisco, Zacatecas, Puebla and of course Mexico city and surrounding states. Puebla has a more marked and stressed accent, but it is in the same style, varying the pitch and timbre of the voice from grave to acute as in waves. It is commonly described as "cantadito" or "like singing"; in this accent the final vowels of the sentences, specially in interrogative form, are markedly prolonged while pitching the voice higher.

The coastal accent, common in Veracruz, Tabasco, Guerrero and Baja California Sur, is opposite the northern accent: they will speak in a low volume, very fast, and blurring their vowels, for what sounds like an hissing "h".

Finally, in the Yucatan peninsula, the accent is similar to the coastal variety described above, however, the meaning of quite a lot of words and sentences, for some strange reason is inverted or is just nonsensical to anyone who is not accustomed to the local idiosyncrasies. That is called "Yucateco" and could probably be a dialect because of the difficulty in understanding what is being said. You hear Spanish, but yucatecos understand something entirely different than what you thought you heard.

Although all other 3 variant accents of Spanish in Mexico are mutually intelligible, people from those 3 regions will find it amusingly hard to understand a speaker from the Mexican Caribbean coast. They also commonly use quite a few loan words from Maya language.

An example, the phrase "Busco el lápiz que perdí, pero no lo busco" (I am looking for the pencil I lost, but I don't look for it, in a literal sense) is perfectly understood by people from Yucatan for whom "Buscar" (search) is the same as "find". Here is a Yucateco vocabulary listing from a local blog

Another exception, albeit a very localize one, is the northern state of Sonora's capital city, Hermosillo. In a similar vein to yucateco, in this city you may hear particularly strange words, that sound Spanish but you will not find on any dictionary. Again locals will get it immediately, and many who live there don't realize it until they visit other parts of Mexico.

A sample phrase from Hermosillo (part humorous, part serious attempt to realize the probable loan words from the Yaqui indian language) would be "El buki bichi a papuchi dando tatahuila en el zoquete" (literally "the naked kid, mounted on someone's shoulders, turning around in the mud").

There are a lot of dialects in Mexico as you can see here, but, according to your request you are looking for something more informal. So, based on this, and based on my experience as well, I can tell you that there are 4 main classifications:

Not the answer you're looking for? Browse other questions tagged méxico dialectos or ask your own question.

4
Names of wedding reception and ceremony in Mexico
13
Does "Prima" have a double-meaning (in Mexico)?
3
Salient features of the Norteño dialect of Mexican Spanish
5
How diverse is Spanish
10
Are there any dialects of modern Spanish which preserve a phonemic distinction between b and v?
2
What does "saca la pues" mean to someone in Mexico?
5
Is "tranquilar(se)" still used to mean "tranquilizar(se)" in any Spanish dialects?
3
Uso de "Y" en lugar de "que" en Mexico para cláusulas subordinadas
9
A combo insult in Mexican Spanish