Why is “Santiago” the equivalent of “James”?

Most Spanish names are quite similar to the equivalent in English, such as:

But what's up with this one?

What's the connection? How do the twain meet?

Are there other unusual Spanish/English name combinations like this?

traducción etimología nombres-propios
Share
Improve this question
edited May 12 '19 at 14:37

From the Wikipedia article on Santiago (name):

Santiago, (also San Iago, San Tiago, Santyago, Sant-Yago, San Thiago) is a Spanish name that derives from the Hebrew name Jacob (Ya'akov) via "Sant Iago," "Sant Yago," "Santo Iago," or "Santo Yago," first used to denote Saint James the Great, the brother of John the Apostle. It was also the tradition that Saint James (Santiago) had travelled to the Iberian Peninsula during his life and was buried there. The name is also complicated in Spanish in that Jaime and Jacobo are modern versions of James.

Another variant is Diego, as in San Diego, as a doublet or variation.

Santiago and James are indeed cognate, both ultimately deriving from the Biblical name יַעֲקֹב (Yaʿqob), but they evolved via different routes. Santiago comes from the Latinised form Sanctus ("Saint") Iacobus, while James derives from an Occitan variant Iacomus: 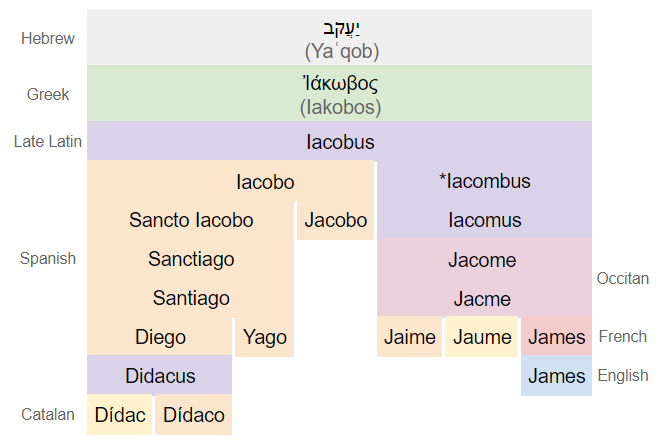 As such, a more obvious set of analogues might be:

As for why most New Testament figures named Ἰάκωβος are anglicised as James,1 as opposed to the closer-to-the-Greek Jacob, this has more to do with historical tradition, and is analogous to the name being traditionally rendered as Santiago (as opposed to San Jacobo) in Spanish:

So how did the Jewish name Ya’akov become so Gentilized as James? Since the 13th century, the form of the Latin name Iacomus began its use in English. In the 14th century, John Wycliffe made the first Bible translation into English and translated Iakobus as James. (However, in both the Old and New Testaments he arbitrarily used the name Jacob for the patriarch). In all future English translations the name stuck, especially after 1611, when King James I sponsored the translation then called the Authorized Version but since 1797 called the King James Bible.

Indeed the association is so strong that many post-biblical Christian figures named Jacob (or a similar variant) are often referred to as James in English.2

· The development Iacobus > Iacomus is likely a result of nasalization of the o and assimilation of the following b (i.e., intermediate *Iacombus) followed by simplification of the cluster mb through loss of the b.

· The form Didacus is a medieval latinised form of Diego (similar to the latinisation Ludovicus, of the Germanic Luis).

Diego makes it even worse to understand, because the "D" in Diego really and properly belongs to the word San, as a "t". In the USA we are so used to the Californian names of San Francisco, San Rafael, San Bernadino for "Saint" Francis, etc., that we naturally presume, with a city named San Diego, there was a Saint Diego. See, though, if you follow suit with San Francisco, you'd have San Iego (Iago/Yakob/Iacom/James). Its a mess, and nobody bothers, and you're not going to be able to formally change a city name (well, you can, but not usually one with 1.3 million people in it), AND in the meantime since consonants got pushed around over the last couple centuries, there's probably been somebody out there given the inaccurate name "Diego" who actually received sainthood!

As an humorous aside, if all that was done in making San Diego's name etymologically correct was to move the "D" (the soft "t") back to the word for saint, it would come out as Sand Iego, and folks would just presume the city name referred to something unique about their nice beaches.

Not the answer you're looking for? Browse other questions tagged traducción etimología nombres-propios or ask your own question.

22
Why are certain words ending in “a” masculine?
11
Origin of the name “Jesucristo”
5
Translating medicine names to Spanish
4
What's the correct Spanish word to mean “as” in this context
2
llamar with names
3
Origin and meaning of a name: “Baute”
6
Is there a Spanish word for “typo”?
6
“WTF” (what the fuck) in Spanish?
6
Why do “beer” and “cherry” have similar words in Spanish and Portuguese? What is the historical origin of this coincidence?