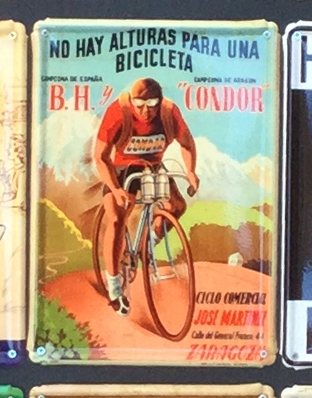 I looked up "alturas" in DRAE, and none of the definitions seemed to fit this poster.  Is it reasonable to translate this as "There are no limits for a bicycle"?

"There are no heights for …" doesn't really make sense.

There already exists the perfect translation, in my opinion, and you can find it in the very title of the famous song Ain't no mountain high enough written by Ashford & Simpson.

can be translated as

Ain't no mountain high enough for a BH-CONDOR bike

Límite (limit, in English) is not a synonym of altura and it does not transmit the relation between cycling and mountains depicted in the image and present in one of the meanings of altura according to the DLE

Possible translation: "No matter the height (of a mountain, hill, etc.), a bike can ride it". By the way, your translation is also correct because a context, an illustration, is given.

I find the "limits" translation pretty awkward, as the word "alturas" doesn't have that meaning, certainly not in European Spanish, and I wouldn't expect a commercial ad to make use of contrived metaphors. I think the sentence sounds weird unless we consider the brand names that follow as a part of the sentence. If we read it as "No hay alturas para una bicicleta B.H.", it makes much more sense. It's still a bit odd because it says "B.H y Cóndor", which I understand as two different brands, so the grammatical version would be "No hay alturas para [las] bicicletas B.H. y Cóndor". Maybe the poster was designed with just one brand in mind and the second one was added later.

Anyway, if my parsing is correct, "No hay alturas para una bicicleta B.H./Cóndor" sounds fine to me, and "alturas" would refer to the "mountain summits" or "climbs" in cycling races. Basically, the poster says that these bikes are so good that no mountain climb is a problem for them, something like "there are no (insurmountable) climbs for BH/Cóndor bycicles". It's the same construction as "en el fútbol francés, no hay rivales para el PSG".

I agree that a good translation would be:

The original can be understood to be equivalent to:

The adjective "alto" (and the noun "altura") can mark the top of a scale, from low to high. We sometimes use these extreme adjectives to mean that something is "too" + adjective:

Note: On reading Ángel José Riesgo's answer, I've realized that my answer above would perhaps be more suitable if "altura" were in the singular. If "alturas" means "high lands" (entry 4 of DLE), then the ad could mean that this bicycle is so good that it doesn't differentiate between a plain and a high land. Therefore, "no hay alturas para una bicicleta (de esta marca)" would mean "for this bike, a mountainous region does not make a difference / does not represent a problem" (because riding there is like riding on a plain).

Assuming context by the picture: a guy riding in the high mountains (backend), means that there are not heights for a bicycle as simple as that, even checking definitions on RAE, I based this on a tracking research of the cartel of Zaragoza España for Behistegui Hermanos Bikes of 1940 add plaque on wikipedia and huncth on my dad's hobby on sport of ciclyn in Spain, also mother tongue is spanish.

Not the answer you're looking for? Browse other questions tagged uso-de-palabras or ask your own question.

6
What is apercibido?
14
Best way to translate 'uneducated', meaning lacking formal schooling
12
"Plátano" and "banana", geographical differences?
2
Unusual usage of "va"
2
Dejar + past participle
11
Usage of the word "hijo" with non-family members
5
A "random" question: usage of "random" as adjective in Spanish
6
What is the meaning of "Ya con hotra y como se yama mijo"?
1
Can something be 'disponible' if it is in service?