Does one use the personal 'a' with a sujeto paciente?

Can anyone please tell me whether the the personal 'a' is kept in line 2? I have a gut feeling that it is.

'los trabajadores' is now a sujeto paciente and one doesn't apply the 'a' to subjects, but perhaps the rules are different for pacientes. 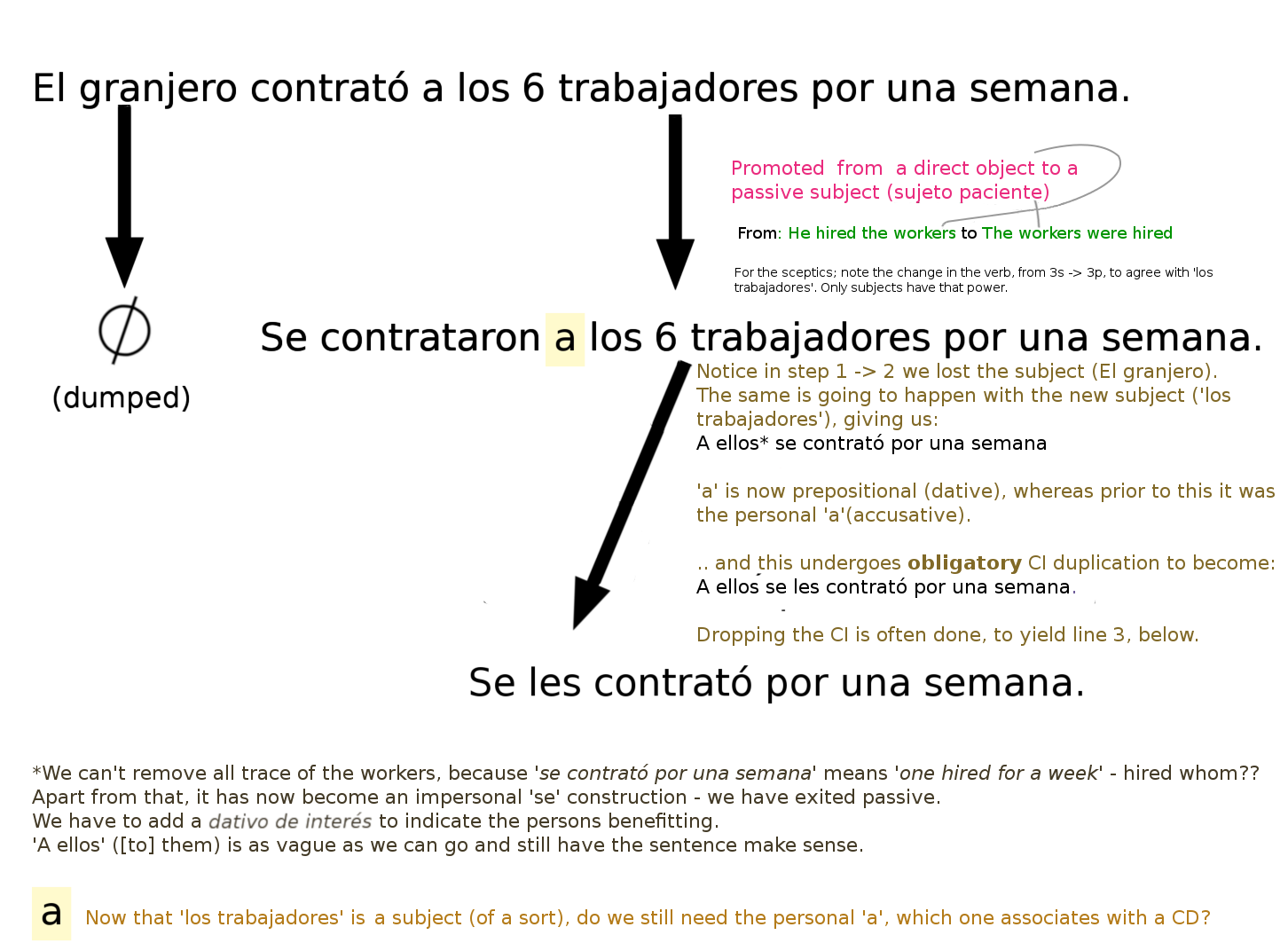 (the image is something I created because that 'les' in the final sentence was inexplicable to me, seeing as there is no dative in the original sentence. It was really getting on my nerves)

I write like I'm preparing material for a class, but that's just my style.

I'd appreciate any corrections - thanks!

There are two ways in which the real subject (el granjero) can be done away with:

Within the passive, we have two possible variants in Spanish to say "The six workers were hired":

1.a. The periphrastic passive:

The pronominal object can be "les" or "los" (I recently tried to explain the vacillation in their use here when the object is personal: the object is direct in meaning, but can be indirect in form).

"Se contrataron a los trabajadores" is therefore wrong. You should say:

The answer to my question was already to be found in Gustavson's post. It simply didn't sink in at the time:

So, I have to consider 'les' as a dop when used in 'se' constructions - as if I haven't enough on my plate already!

So a sentence such as:

Perhaps it is a mechanism to avoid any ambiguity. If you write 'se los contrató' (intending to mean 'one hired them') a native (if context is lacking), on seeing the familiar iop+dop+verb pattern, might interpret it as 'les los contrató' and get:

Se los contrató por una semana ← he hired the tools to the workers for a week.

To force the impersonal se interpretation, if we use 'les' in the slot where one expects a [conventional] dop, then perhaps it works as a trigger? (the iop+iop+verb pattern being grammatically incorrect if we consider them as a pair of pronouns, telling us that now 'se' does not equate to 'le/s')

To me, it looks like a bit of a fudge!

[In fact, it's pretty ugly. I wonder how it sits with orthodox grammarians? If you reject it, then you have the problem of how a dative pronoun suddenly makes an appearance - I know, I'm like a dog with a bone with that dativo de interés!]

Anyway, this is something that has been bothering me, so a big 'thank you' to Gustavson.

So, the 'a' is dropped, presumably because of the farmers being the sujeto paciente.

Looking over your answer, I'll copy your example and put the farmers before the verb (after all, it's where you'd expect a subject to be)

Do the opposite (as I had done):

and people might look at it askance, and say 'hey, you missed an 'a', - because at face value it does look like a direct object.

What about my reasoning as to why the dative was introduced?

Is there any flaw in my logic, which goes as follows:

On every reduction the subject is lost: first it's the farmer, and then the workers – but when you remove the workers you've just got gibberish:

I want to keep things in the passive voice, so with the workers gone, I contend that one is forced to use a dativo de interés (in this case 'A ellos', whose introduction triggers an obligatory duplication):

and because of the redundancy, one can drop the 'A ellos', and just keep the IOP:

I can't think of any other explanation as to why a dative should appear – not when the original hadn't any.

{Edit: I had 'contrataron', but the only subject left is 'one', so verb in singular. At the end of the day, do we end up with an impersonal se construction? or is there ambiguity in Spanish between 'they were hired' and 'one hired them'? I guess to differentiate between the 2, in ambiguous cases the 'a ellos' is kept}

Thanks once more, Tom

Not the answer you're looking for? Browse other questions tagged gramática or ask your own question.

4
“A esto se le llama …” What grammar rules does this follow?

1
When should one use “para” for the English word “to”?
1
How to deal with personal direct object and indirect object?
1
How does one emphasize something in Spanish?
2
Sentence with more than one conjugated verb
1
Why does this passage use the imperfect subjunctive?
7
Using the “a” preposition with “echar de menos” and a personal object
4
Using 2 reflexive verbs (with similar pronouns) in one sentence
0
Past tense passive se with personal a?