What's the meaning of "carne mechada"?

My friend and I were discussing 'carne mechada' - I've only ever heard the word in conversation and I thought it meant 'mixed' but according to our google searching it's a little more specific.

Can anyone tell me how the term 'carne mechada' is really used, what does mechada mean in context and does it have any slang usage?

I don't know if it has any slang usage. It's a way, actually two, of preparing meat:

According to RAE, mechar means "to introduce fat in the meat prior to cooking it". So, carne mechada would be meat cooked with fat inserted in it. But that's a very strict definition. I think other things are inserted, too, not just fat. So in that case it would be "stuffed meat".

But it is also be carne "en mechas", a way of preparing some beef cuts which, after cooking them, are shredded into "threads" of meat and served in different ways: with tomato sauce, in arepas, with rice... See Wikipedia article.

You stuff things (normally fat, but also ham, nuts...) into carne mechada with an aguja de mechar ("barding needle" or lardoir) like this: 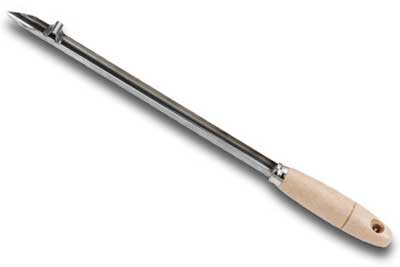 Completing @MikMik's answer, I must say that in my part of the world (western Andalusia), the carne mechada (usually pork loin) isn't normally stuffed nor shreded into threads, just cooked with certain seasonings and condiments, while still retaining the name mechada (pronounced mechá).

The beef mechado in my part of the Philippines is made of whole rump roast...about three strips of pork fat (wicks) inserted close to each other in the center of beef...cook whole like pot roast... with tomato sauce, lemon/calamansi juice soy sauce n bay leaf...its done when tender.... cooled for 10 min , sliced crosswise(see the wicks) then add the gravy ....

Carne mechada is "pulled meat"...generally it is pork shoulder meat slowly cooked and then "mechada" (pulled) with a fork...like the pulled pork you put in a bun. Mechas is slang for hair threads....when your hair is too long you don't have hair anymore...you have "mechas".... From the same origin of the word: a woman goes to the hair dresser to get her "mechas" done...in this case it means the shines in the hair slightly more clear than their natural clear.

The beef mechado in my part of the Philippines is made of whole rump roast...about three strips of pork fat (wicks) inserted close together in the center of beef...cook whole like pot roast... with tomato sauce, lemon/calamansi juice soy sauce n bay leaf...its done when tender.... cooled for 10 min , sliced crosswise add the gravy ....

Mechada in this case means "little strings" because you make little threads of meat after you cook it. There is no fat in the meat cuts that are used in Carne Mechada which is typically skirt steak.

Not the answer you're looking for? Browse other questions tagged vocabulario definiciones or ask your own question.