Does "No, si me parece una idea estupenda" make sense in Spanish?

I recently came upon the following sentence:

Arturo's reply to Gema seemed odd. It is a construct I haven't seen before. At first, I thought that maybe it was a typo and that the "si" should be written "sí" to serve as a type of emphatic marker. So I did some online searching and discovered that this "No, si" combo was actually pretty common. Even before doing that, I went to a machine translator (DeepL) and this is what it gave me:

No, I think it's a great idea.

So did Reverso. This only solidified my thinking that perhaps the "si" should really be a "sí" because the situation is one that would warrant an emphatic "sí." For the record, Google Translate translated this sentence as:

No, if that sounds like a great idea to me.

which does not make sense in English.

I'm reasonably convinced that the meaning of No, si me parece una idea estupenda is the one DeepL and Reverso provided, but what I am still unsure about is whether or not a phrase like this should be written with a "si" or a "sí." Anyone happen to know? If the "si" is correct, could someone then explain to me what's going on with this sentence?

The construction "No, si..." definitely uses the unaccented "si". I would say this uses either the second or the fifth meaning of si:

i.e., "si" at the beginning of a sentence is used to introduce an ascertainment (something that is known to be true) or to give emphasis or energy to what is being said. For example:

The construction with "No, si..." is used to agree with something that someone just said. The meaning of "No" is probably "you don't have to convince me", or "you don't need to say more".

I haven't been able to open the link provided to the exercise.

Anyway, I find Arturo's "no" in reply to Gema unidiomatic, or inconsistent (good catch, Lisa!). What is he saying "no" to? (please note the characters are inverted in OP's account of the dialog):

What I would use to emphasize Arturo's high opinion about the idea proposed by Gema is:

Arturo: Pero si me parece una idea estupenda. (Meaning: In fact, it does sound like a great idea.)

I would only use "no, si..." to express surprise in other contexts, to mean "no lo puedo creer" (I can't believe it). In that case, "no" would function as an interjection rather than as an adverb of negation, as when we say:

I think that for this "no" to make sense combined with the conjunction "si" it has to be enclosed within exclamation marks, to clarify it is an interjection, not an adverb of negation. Without the exclamation marks, it makes no sense to me:

Arturo: ¡No, si me parece una idea estupenda! (Wow, it does sound like a great idea to me!)

Note 1: I've read Wimi's reply (which is very good) once and over again and I'm not sure I can rebut the argument about "no" being short for "you don't need to convince me," but personally I think this would be more likely if Gema had said something for Arturo to say "no", for example:

Note 2: After reading OP's self-reply, I have to say I'm not at all familiar with the use of "No, si..." to introduce an emphatic comment if "no" does not explicitly negate anything, but it seems to be some regional usage in Spain. I am instead familiar with exclamatory "¡no!" (in colloquial registers it could even be spelt with more than one "o" to express surprise: Nooo), as well as with "pero si".

Now, I do find OP's research on unaccented "si" to introduce emphatic comments really enlightening. Still, I think it keeps its conditional nuance, as I explain below by making reference to the examples contained in the site to which OP provided us with a link (I did not make a literal translation but instead added more words in English to make the idea clearer):

"No, si ..." (with no accent) is a very common expression (at least in Spain) and it's a reluctant/pessimistic/sarcastic admission of some fact.

In the context of the example No, si me parece una idea estupenda, Arturo agrees with some idea, while likely maintaining some discrepancy in other parts of the discussion.

It's hard to find relevant examples searching for "no, si", so I'd recommend to duckduckgoogle something like "no, si al final" or "no, si me parece" itself.

I don't want to refute what wimi and Gustavson have written, but I do want to add something that deserves more attention than what might be had with a comment. And truth be told, what I have discovered since having posted the question does make me wonder whether or not certain aspects of Spanish grammar, with respect to the word "si," may have been missed.

In the book, A Comprehensive Spanish Grammar, on page 390, you will find an entry for "si." Entry #851, refers to the use of "si" as a conjunction meaning "if." To be perfectly honest, I've never known it to be anything but a conjunction meaning "if," so it is very difficult to get my mind to see this "si" used in a different way. Be that as it may, Entry #852 provides what surely must be a lesser known fact about this word "si":

After verbs of saying or thinking, si can sometimes be found where que would be expected. The explanation for this is probably that there is always a feeling of doubt, the verb actually having the meaning preguntar 'to ask' or preguntarse 'to wonder'.

I added the excerpt above using the same formatting with some small deviations here and there (e.g., bolding). This statement also applies to the excerpt below.

Now, having said all of that, I also decided to check out what this book had to say about "sí." On page 289, for Entry #626, Jacques de Bruyne writes:

Sí, in addition to its meaning of 'yes', may be used to deny a negative in a preceding sentence, and is the equivalent of an English contrastive stress or 'indeed, sure, right'....

Now, let's apply all of this to my original question, which was Is the "si" in the response a typo for "sí," and if not, what is it doing there? What is its purpose?

Let's start with the first excerpt, honing in on the phrase After verbs of saying or thinking ... The verb used in the response is parecerse (in the form of me parece). Could this be a verb of saying or thinking? Sure. But the rest of the sentence (and those that go beyond what I included in the original post) indicate that Arturo is not wondering if Gema's ideas are good. He is totally on board with them (and based off of the tone in Arturo's voice in the accompanying audio, I think most would agree). So, because of that, I think we can rule out that this use of "si" is not that of the use described in the first excerpt.

To me, it is quite clear that the "si" here is used emphatically. This then raises the question for me Why use "si" instead of "sí"? I learned a while back that "sí" can be used emphatically, but now I'm learning that plain old "si" without the accent can be used emphatically, too. Now I am confused. When should I use which and am I conveying something slightly different when I use one or the other? Fortunately, a second attempt to find more information about this mysterious unaccented emphatic "si" proved fruitful. This is what I discovered:

... the word si (without the orthographic accent), commonly used in conditional clauses, can also be used to indicate that you are affirming something very emphatically. It's not always easy (or necessary) to translate it into English, [but it is often translated as "indeed"].

Let's contrast that with the accented "sí" I was already familiar with:

Like the repetition of the word "do" in English, this use of sí has a purely emphatic effect. You could easily answer tú no lo hiciste (you did not do it) with a simple yo lo hice (I did it), but using yo sí lo hice (I did do it) is way more common.

For examples and more information, please visit the following page:

TLDR: The unaccented "si," which most students of Spanish have learned is a conditional conjunction meaning "if," has other uses in Spanish. Like the accented "sí," they can both be used for emphasis. However, they have slightly different meanings. Here is a real world example of the unaccented "si" (which can be translated as "indeed"): 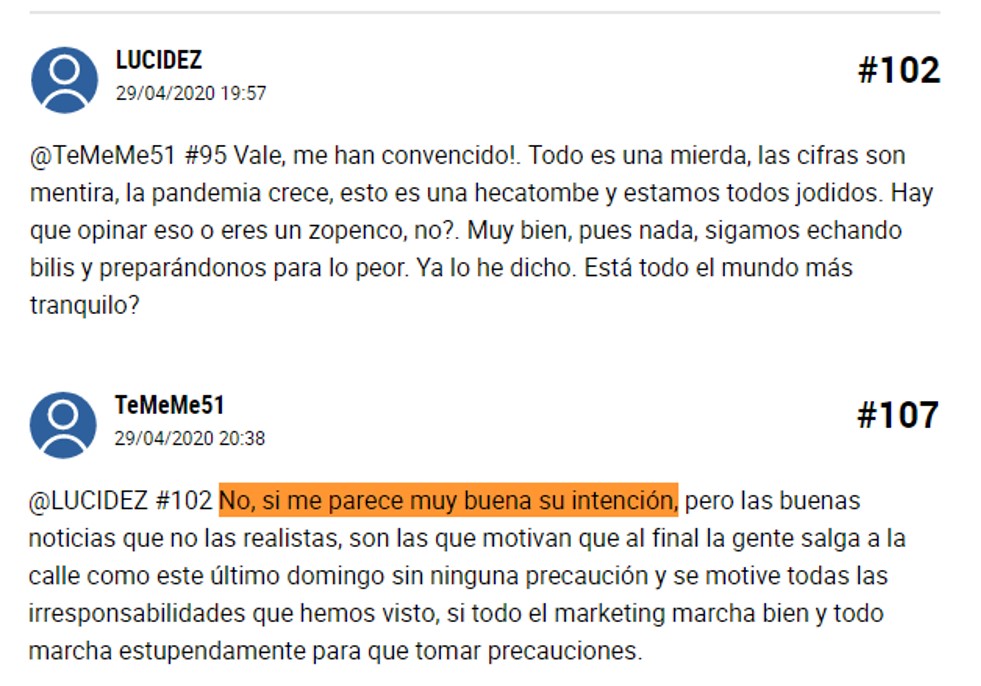 Note: Examples of "No, si ..." with this usage were difficult to find, but the example above, taken from the comments section of a relatively recent article found in El Mundo does show that, at least in conversation (even that which takes place in social media), this is a phrase one might hear (or see).

Contrast the above with this example of the accented "sí":

It was very difficult to find real world examples of this. The example above is part of one context example I found on Reverso. You can find several more here and here.

7
Do "tal" and "tan" both mean "such"?
5
If someone needs to learn how to say "Don't touch" using the formal command, which should be used: "No se toca", or "No se toque"?
5
Is "tal cosas" accepted as standard Spanish?
7
How do you say "build it up too much" in Spanish?
4
Besides "Who works?" what meanings can "¿Quién trabaja?" have?
8
In a declarative statement, why would you put a subject pronoun at the end of a sentence or verb phrase?
2
What is the difference between "resignado," "renunciado," and "dimitido"?
6
Why do some write an "a" after the verb "convocar" and others omit it?
6
Is "indígeno" a word in Spanish and, if so, how does it differ from "autóctono"?
4
If "gustarse" does not exist in the Spanish language, why has "me gusto" for "I like myself" made it into the language?