Is/Was there a Basic Spanish?

There is a whole Wikipedia written in Basic English. This leads to the question if something similar exists for Spanish. Maybe a type of controlled language for teaching aboriginals a simplified Spanish at the time of colonialism?

What would be/was the basic vocabulary of this simplified Spanish?

Source of the numbers: Wikipedia: List of languages by number of native speakers

I was not aware of any attempts to create a single language that would be "simple Spanish". Still, you can find a lot of books written in simplified Spanish. They are called "lecturas graduadas" and are adapted for students of different levels.

The Common European Framework of Reference for Languages (CEFR) defines six levels of knowing a language:

In Europe, Plan curricular del Instituto Cervantes is the standard reference for Spanish. For each level, teachers decide which vocabulary and grammatical structures students already know and which are appropriate for this level, thus roughly defining a 'simplified' language that can be used to write textbook exercises or "lecturas graduadas".

However, this simplicity is not strict: we have no standard "word lists", and teaching materials intentionally include less frequent words.

According to the approach of Instituto Cervantes, one of the essential skills that a student has to learn is

to apply standard techniques when using a foreign language: for example, to infer from the context the meaning of an unknown word or grammatical structure

There are even special exercises designed to train the skill of guessing the meaning from the context. In comparison to this approach, a controlled simple language where all the words are already known would be too artificial.

There have been various attempts made at forming "simplified Spanish" but none of them seem to have caught on as a "standard" in the same way Basic English has--very likely for reasons pointed out in @vartec's answer.

You can read about one such proposal, apparently intended for academic use, which suggests such simplifications as simplifying numbers by using diez y uno, diez y dos, etc, in place of once, doce, etc; using simpler conjugations of some irregular verbs; more consistent spellings (using k in place of a hard c, for instance), etc.

One could argue that this really isn't the same as "Basic English" since, unlike Basic English, it actually changes grammar and spelling conventions, rather than creating a simplified form that would be natural for a native speaker to read.

As far as I know, there is no "official" Basic Spanish.

But take the 850 Basic English words, translate them into Spanish, and you have a "basic Spanish" vocabulary that you can work with. At least, those are the Spanish words I'd learn first.

Wikipedia's "simple English" pages are basically simplified, often truncated versions of the regular articles and likely attempt to refrain from words that would be considered past the 8th grade level — the level at which one should be able to at least start reading a newspaper. (At least here in the United States, budding journalists are advised to write for the "8th grade level.") But why speculate when Wikipedia defines it quite well: 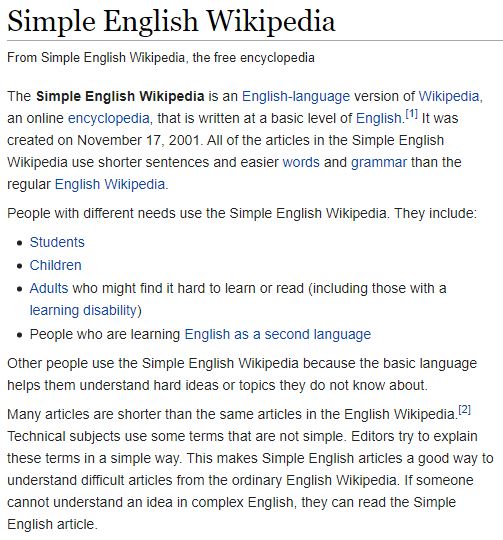 For more, visit the page here.

My advice to you, if you want "simple Spanish," is to collect some word lists from kindergarten to the 8th grade and read books intended for those levels. Word lists may be easier to find in English. You can find some here:

Learn the Spanish equivalents of these words and you should be well on your way to a mastery of "simple Spanish." If you want to add reading to your learning plan, books in Spanish between the 4th and 8th grade level (ages 9-12) can be found here.

I don't know if Wikipedia plans to create "Simple Spanish" Wikipedia pages. It would be nice if it did. Wikipedia will appear to have translated your simple English page into Spanish,

but if you actually click on that link, it appears to be just a link to the main article in the other language — one without any attempts at simplification. Take a look:

But, short of that, you can take Wikipedia's simple English pages and have them translated by any number of machine translators. I recommend Reverso, DeepL, and Google Translate. You will run into a bit of trouble if you just try to copy and paste from the Simple English Wikipedia page (because everything on the page gets highlighted), but if you click on "Change":

You'll be able to highlight just the portion you want: 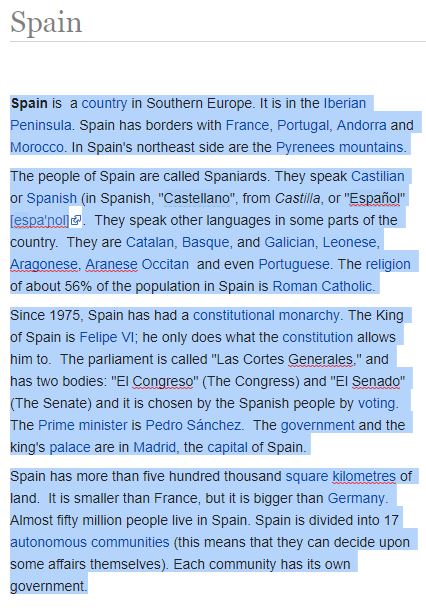 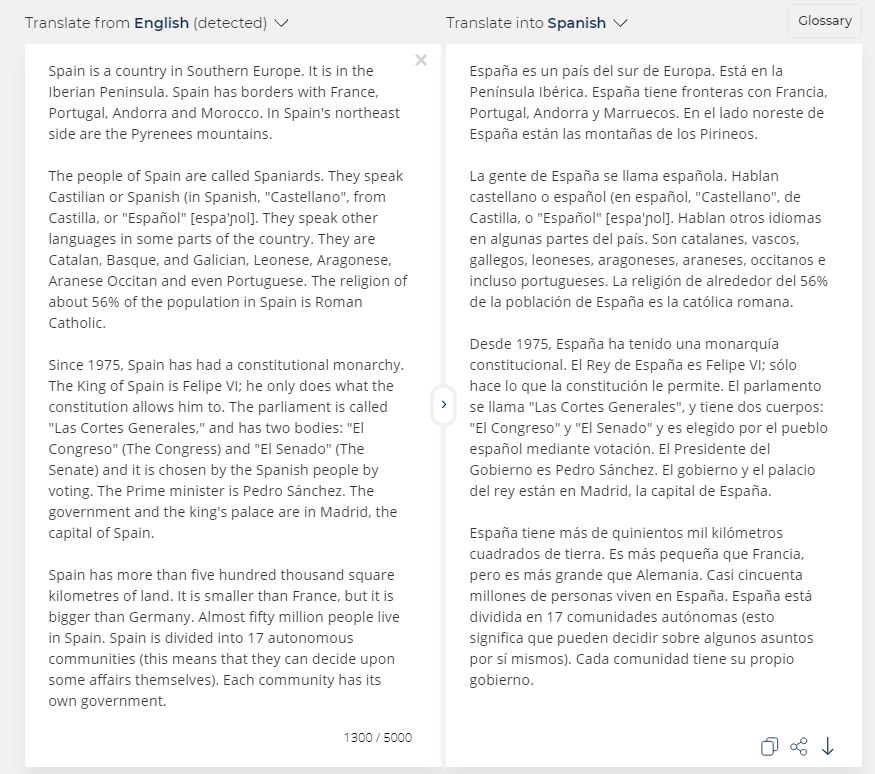 The translation above is from DeepL. I could have chosen the other two I recommended, but in terms of readability and features, I felt DeepL does the best job of this. For example, with DeepL, if you don't like the translation or want to see how else a word may be translated, just click on the word (in the translated version) to see a drop down list of other possible choices. DeepL will change surrounding text as necessary to fit the new selection (if you choose one). This feature is immensely helpful when translating something that uses second person voice (e.g., tú vs. Ud.).

Ideally, one day you will be beyond the need or desire for a "simple Spanish." Few things, if any, are made better when they are altered for the lowest common denominator.

Note: This notion of a "simple Spanish" may also be something that some would confuse with "neutral Spanish." There is such a thing as "neutral Spanish," but this is more about stripping out regionalisms and using Spanish in a way that might be better understood by any Spanish speaker, regardless of which Spanish-speaking country one may be from. This is of special concern to filmmakers who want as wide of an audience as possible and wish to maximize profit at the box office. This excerpt I found explains it even better (minus my editorializing about motives):

Also known as “standard” or “international” Spanish, neutral Spanish is a convention that doesn’t technically exist as a language per se, but refers to the process of finding terms and phrases that are universally understood by all Spanish speakers or best suited to a multinational target audience.

You can find the full article here:

When (and When Not) to Localize into Neutral Spanish

The Wikipedia article on "Standard Spanish" also includes some information on "neutral Spanish." It also mentions motivating factors that include the movie industry (but I think you'll find them informative and worth reading), it also includes this:

Another motivator for the unification of Spanish is the translation by multinational companies of manuals, software, websites, etc., from English to Spanish. It is easier to use a neutral version of Spanish than to create different versions for each country or region. If it were done by country, there would be over twenty versions, and if by region it would be difficult to define which countries belonged to which region, as well as being complicated from the logistical point of view. The result has been to identify a neutral Spanish, a version that tries to avoid regional phenomena, such as the Spanish-speaking American voseo, or terms that may be identified with specific countries (for example, for “computer”, the term in Spanish-speaking America is computadora, except in a few areas that prefer computador, while in Spain the most frequent term is ordenador; as a result, Microsoft Windows uses the region-neutral term equipo, meaning "equipment"). This neutral language is developed with the help of glossaries that prescribe the preferred terms and the terms to avoid. It is a common occurrence in the computing field, because it lowers production costs.

The article contains a lot more information that I think you'll find interesting, so I recommend it, too.

Not the answer you're looking for? Browse other questions tagged historia or ask your own question.

6
Translating a text from the XV century to modern Spanish
8
What is the earliest preserved publication in Spanish?
14
Do any Spanish words exist that aren't pronounced as expected from their spelling?
7
When did the Spanish language lose the long vowel sounds that Latin had?
5
What euphemisms were there in Old Spanish to speak about the sexual act?
8
When was "dios" pronounced "díos" in Spanish?
6
México vs Méjico in pronunciation throughout history and countries
12
Origin of "dormir como un leño" in Spanish
4
Were there any rules to write accent marks in Spanish before the creation of the Academy?
6
On the origin of "casa"