Does "Prima" have a double-meaning (in Mexico)?

I recently saw this billboard in León, Guanajuato, México: 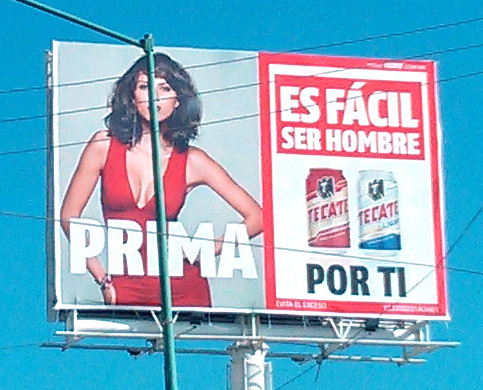 [Sorry for the awkward placement of the light pole in the photo; I was driving when I snapped it.]

The sign is an advertisement for Tecate beer, and follows a pattern similar to other Tecate advertisements which also read "Es fácil ser hombre", with some sort of clever or cute photo with a simple caption. (The one I recall was a wire coat hanger as a TV antenna).

But this one puzzles me. What does a photo of a woman, and the caption "Prima" mean in this context?

There must be some double-meaning with which I am unfamiliar.

In this context, "Prima" means the same thing you're most likely thinking (female cousin), the deeper meaning comes from a Mexican (vulgar) saying that goes:

The word arrima in this particular case has sexual connotations (kind of bringing your genitals closer to her, so to speak).

Paraphrasing some guy on the Wordreference forums:

Situation: Jorge and Juan are at a coffee shop. Jorge greets a chick that's passing by, and Juan asks: "Quien es ella?"; these are 2 possible scenarios based on that:

So basically as you can see the lady in the advertisement is quite attractive and following the premise that Es fácil ser hombre it's easy for a guy to see a beautiful lady and want to do "nasty" things with her or something like that...

You can have a lot of female cousins and your wife, girlfriend or date probably won't meet them all. So if you happen to be talking or spending a lot of time with a girl or even seeing someone else and your partner/date questions you about her it's a great excuse to say she is your cousin since she can't get mad that you are spending time with your "family".

@darkajax answer gives probably the most accurate connotation, but I'd say that it's not the only one. A la prima se le arrima is unarguably the topic they evoke with the word prima in there, but arrimar is not always an euphemism for "bringing your genitals closer to her". It also means just

"introduce me to your cousin, that's what you are expected to do with a cousin!".

Therefore, I don't consider it always as an offense. Of course in the Tecate poster, it's the vulgar connotation they refer to, but I complement darkajax's answer just to let people know that the phrase it's not always that vulgar.

Prima in proper spanish is a cousin. However, in colloquial terms or slang, prima can be a good friend one socializes with often. Like homegirl in english.

Not the answer you're looking for? Browse other questions tagged modismos méxico or ask your own question.

7
What is the meaning of the phrase "¿Cómo ves?"?
4
Names of wedding reception and ceremony in Mexico
3
Meaning of "andar de vago(a)"
10
Meaning of "Me cae gordo"
8
Why does "madre" have so many different meanings?
6
Meaning of "que ni que"
2
Spanish dialects within Mexico
2
What does "saca la pues" mean to someone in Mexico?
3
How is "manejar" used in Mexico? As "to have"?
4
What does "colonia" and "interior/dpto" means in Mexico on address lines?