When it comes to verbs on action buttons on a user interface, why is the infinitive verb often used instead of a command form of the verb?

So, my question is two part:

traducción verbos
Share
Improve this question
asked May 21 '20 at 7:01

In the article Infinitivo por imperativo Infinitive for imperative from the website of RAE there is an explanation on how this is normal in Spanish.

In short, they explain that the Spanish language uses the imperative as an exhortative form in these cases:

When their target audience is not clear or is a collective one. This is used when labelling products, showing how to use a device, etc.

Which verb form do you guess that is used in English? Why do you say that it's not the infinitive?

According to the Cambridge Dictionary

the basic form of a verb that usually follows "to"
In the sentences "I had to go" and "I must go", "go" is an infinitive.
"Go" is the infinitive form.

I think that English is using the infinitive too. You can replace "go" by "open" in the highlighted sentence above.

I'm pretty sure that the label does not correspond to the third person:

This button opens a new window.

I think that the construction used in English is a very shortened version of:

If you click this button, it will open a new window.

Such construction is the second conditional form: if + present, will + infinitive.

If you want to open a new window, you have to click this button

In Spanish, we use this second formulation that can be translated almost word by word as

Notice that in both languages the infinitive form is used.

You are not exhorting the button, it's not a command directed to the button, the navigator or the computer. You're telling users what they have to do to execute actions, to obtain a result. Infinitives. 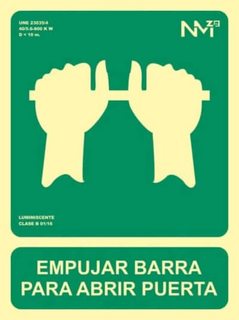 Not the answer you're looking for? Browse other questions tagged traducción verbos or ask your own question.

10
¿"Tooltip" en castellano?
4
Why is the verb in plural form in "El número de figuras que entran"?
1
when and when not to use the infinitive of a verb
1
Why do I sometimes see the reflexive pronoun in a verbal phrase (either before or attached to a command or progressive form) and sometimes not?
3
Are there verbs where the lexical root of the perfect tense forms differs from that of its infinitive form?