With all the recent events across stacks I don't know if people are still in the mood for a good game of Translation Golf, but I have been keeping some records (and the idea) to publish this edition one day and I don't want to leave it forever forgotten at the bottom of my to-do list. I'd rather see it published and not answered than unpublished.

If this is your first time with Translation Golf, there's some info for beginners at the end of this post.

And here's the text 1 of Edition LI:

I've now got myself into the kind of trouble that I have always considered to be quite a possibility for me, though I have usually rated it at about 10:1 against. I shall shortly be pleading guilty to a charge of sexual offences with a young man. The story of how it all came to be found out is a long and fascinating one, which I shall have to make into a short story one day, but haven't the time to tell you now. No doubt I shall emerge from it all a different man, but quite who I've not found out.

The goal is to translate the given text to Spanish, using as few letters as possible, while keeping all the original text's meaning and concepts more or less intact.

Here is a potential translation which uses 403 characters:

1 About the chosen text:

Alan Turing was a human being of exceptional intelligence — a mathematical genius — and worked as one of the leading code-breakers during World War II. He is also considered to be the "father of modern computing" thanks to his pioneering work in the field of computer science.

His work during the World War II, breaking the Enigma code, shortened the war in Europe by as many as two to four years. At a conservative estimate, each year of the fighting in Europe brought on average about seven million deaths, so the significance of Turing's contribution can be roughly quantified in terms of the number of additional lives that might have been lost if he had not achieved what he did.

If U-boat Enigma had not been broken, and the war had continued for another two to three years, a further 14 to 21 million people might have been killed (Source to some references for those claims: Alan Turing: The codebreaker who saved 'millions of lives').

In 1952, he was charged with gross indecency after admitting to a sexual relationship with another man, and as a result was told to choose either imprisonment or chemical castration as punishment. He chose the latter. Alan Turing was found dead on June 8th, 1954, a day after taking his own life. He was aged just 41.

Turing wrote the letter used in this post (the whole letter can be seen and read in the picture below) in 1952 to his friend and fellow mathematician, Norman Routledge, shortly before pleading guilty. 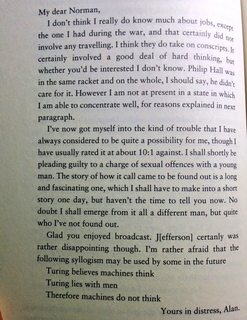 I am posting this prior to reading the hidden translation in the question, and also prior to reading Charlie's. I don't want to allow myself to be influenced by the other treatments. Please check it for faithfulness to the original.