What are the Spanish words for North and South and how are they different?

Here are some words that mean "north" or "related to north" in Spanish:

And some words that mean "south" or "related to south".

This answer was originally written for the question, "Words for **East” and “West” in Spanish?" For full context, please visit that page.

Really good question and similar to the one I had myself which was along the lines of What's the difference between "del norte" and "septentrional." I was also curious about "del sur" and "meridional." Since until now I was unaware of poniente/levante and saliente/naciente, I'm not going to expand on those. I'm just going to focus on words for north and south and then also add a bit about words for northern and southern. I first want to start off with this: 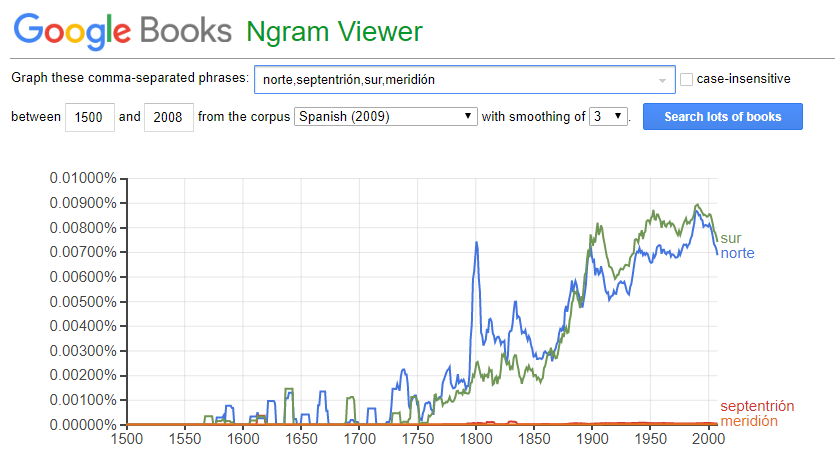 As you can see, "sur" and "norte" are vastly more common than "meridión" and "septentrión." In a comment made in the discussion thread for "Words for **East” and “West” in Spanish?" MikMik mentions that "mediodía" is a noun for "meridional," but "mediodía" can mean many other things and "meridión" was actually influenced by the word "septentrión." (See the DLE entry for "meridión.") For more on "meridión" and related words, visit this page here. For more on the etymology of "norte" and "septentrión," see this here. On that page, you will also see the word "boreal," which is the same as the English word and carries the same meaning, but due to the fact that it is the least common of the translations for "northern"

and often specifically a reference to this:

the climatic zone south of the Arctic, especially the cold temperate region dominated by taiga and forests of birch, poplar, and conifers.

I won't add additional details/observations about this word. Its use is pretty specific.

For those who want to know if there might be certain situations in which you'd use certain words (as did the person who posted "Words for **East” and “West” in Spanish?"), what follows are some observations I've made. For the most part, the words for "north" — norte and septentrión — look pretty interchangeable to me, (as do their adjectival counterparts — del norte and septentrional, but more on that later). If you look closely at the results I pulled from the Corpus Diacrónico del Español (CORDE), however, there are some differences. I've colored cells and bolded text to bring your attention to areas where these exist: 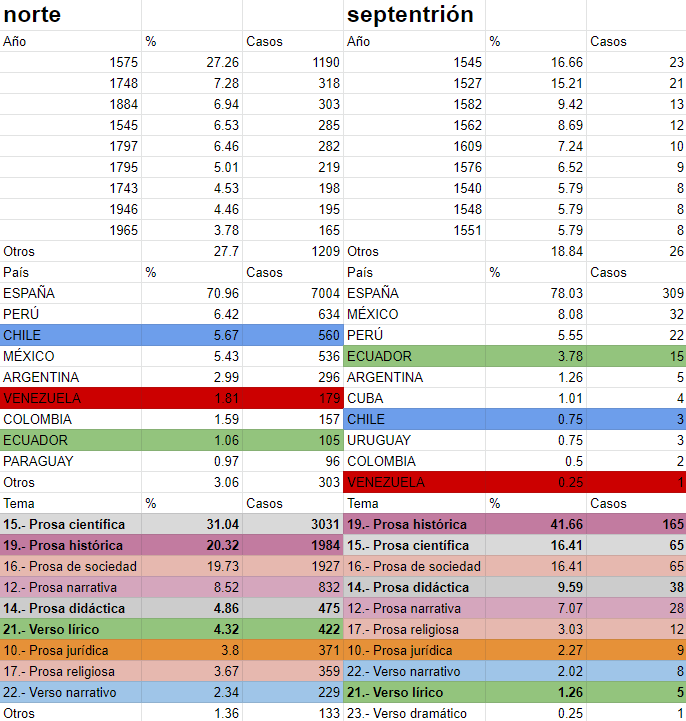 There were too few results for "septentrión" (and septentrional) from the Corpus de Referencia del Español Actual (CREA) to bother including, so let me turn to some collocations of the adjectives derived from these words, using "del norte" for "northern," and "septentrional," also for "northern." I'll throw in "norteño," as well since it, too, is translated as "northern."

Translations in the chart above were conducted via a simple and rapid translation, compliments of Google Chrome. No alterations were made to it. If you have difficulty seeing the chart above, you can right click the image and open it in another tab.

I shaded in blue those collocations that existed for more than one of the three words for "northern." As you can see, there's quite a bit of overlap with some combinations, but I was able to identify some patterns, which are listed below:

tends to be used in combination with what can be found in nature or be considered geographical features (e.g., mountains, rivers, lakes, islands), as well as directional contexts (e.g., from north to south)

Obviously you can use norteño/-a in combination with something like ciudad (city) and you can use ciudad with del norte and septentrional. Initially I thought there might be some slight difference in meaning or usage, but if there was one (and I looked at a lot of headlines and even some book excerpts), I did not notice one.

Please keep in mind that I am not a native speaker of Spanish and that my opinion on how these three words are used was largely based on what was found via the collocation database below:

According to the website for this collocation database, 4,000,000 Spanish collocations from a 750 million word text corpus were compiled, so I don't feel as if I'm trying to mislead anyone for attempting to draw conclusions from it as a representation of the way Spanish is used. If you're a native speaker of Spanish (or fluent or a teacher or know a lot about the Spanish language) and you disagree with any of my observations, feel free to comment.

Earlier, I mentioned I'd take a look at words for "south" or "southern," but I have a feeling that what I would find would be awfully similar to what was found for north/northern. If anyone reading this wants to explore south/southern using the tools I've used for this answer (or any others you might find/be using) feel free to do so and if you find anything that counters what I've mentioned or that you find surprising, please don't hesitate to add another answer to this thread.

Lastly, a couple of others things should probably be mentioned somewhere in this thread. For example, the word "norteño" can mean a lot of different things, but for the record, I restricted the discussion of this word to its usage as a word that can be translated as "northern." For additional meanings, see this here.

The other thing that should be mentioned is that the word "septentrional" is actually a word in English and its meaning is virtually identical to that of the Spanish. You can read more about it here. However, unlike Spanish, it is rarely used anymore. Then again, it, along with "meridional," appears to be on the decline as well:

"Norte" and "sur" have the same origin as "north" and "south" from English/French:

As the other answer says, other names for North and South in Spanish are:

Not the answer you're looking for? Browse other questions tagged selección-de-palabras vocabulario sinónimos or ask your own question.