A small gift given to the guests at a party as a gesture of thanks for their attendance, a memento of the occasion, or simply as an aid to frivolity.

Party favors are traditional in weddings or even birthdays. Sometimes they might be personalized for the guests.

For example, my kid went to a birthday party the other day and he was given a small box with some play dough, candy, crayons and an inexpensive toys. For his birthday, coming up soon, we have something similar with a bag with candy, a small toy and other stuff. You could think of it like a small bag that would come out from a piñata, with a different array of stuff (treats, toys, etc.).

For a wedding or other ceremonies (baptism, first communion) you may get something more personalized about the occasion. A picture of the celebrant(s) or other merchandise including the date, a small ornament or some inexpensive gift, for example.

I wonder if in Spanish party favors have another name beyond "regalos". To my recollection, at least in Spain they were not that common in birthday parties (there were already a lot of treats) but of course these are given in weddings, first communion, etc. There must be a way to refer to all these small gifts that you give to the attendants of your party or celebration.

To clarify, in English, when you say "party favor" everyone know that is the small gift from the organizer to the guests. The gift, is what the guests give to the celebrant(s). Translating "party favor" as "regalo" (regalo de boda, regalo de cumpleaños) in Spanish leaves some ambiguity about if it's the one made to the guest or to the celebrant(s). Or maybe people just use "regalo para los asistentes/invitados" for a lack of a better term?

The word I'm looking for must be valid for both birthday-party favors as well as wedding- or baptism-party favors.

in Spain they were not that common in birthday parties

Trust me, they are now.

There are several options, though none of them are as specific as "party favor":

The most used is probably detalle, because it conveys both the meaning of "something showing affection, courtesy" and that of "something small", making it distinct enough from the actual presents the celebrants are receiving.

If you make an online search for any of regalo de invitados para comunión, recuerdo de cumpleaños, detalle de comunión etc. you'll see that detalle is usually included in the results, even if you didn't search for it. 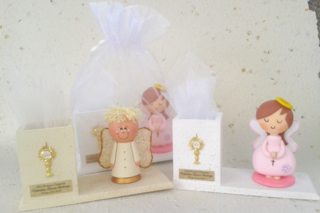 In Mexico, it is common to give candies and small stuff to children at birthday parties and baptisms. Here, this little bag is called "aguinaldo", and the second meaning in DRAE's definition fits.

Not the answer you're looking for? Browse other questions tagged traducción solicitud-de-término or ask your own question.