Words which palatalise when made feminine?

When declined as feminine, aquel becomes aquella, not just adding the feminine marker -a, but palatalising the final consonant /l/ → /ʎ/. A similar thing happens with don, doña.

Are there any other words like this in Spanish? i.e.

If not, why did it happen in these words?

As pablodf76's answer says, this comes from a historical neutralization of the contrasts /ɲ/ vs. /n/ and /ʎ/ vs. /l/ in syllable-final position. (From what I remember, a similar neutralization happened in a certain stage of French, although French has different examples of alternation because it developed /ɲ/ and /ʎ/ from different sources, and of course French and Spanish words often have different syllable structures.)

The neutralized coda consonant is typically non-palatal, except for if it becomes palatalized by assimilation to a following palatal consonant (circumstances where that can happen are described on this web page: Neutralization in Spanish).

I don't know of any further examples of alternation between masculine and feminine words other than the ones mentioned in the question and in pablodf76's answer. I found an article, "Spanish 'Depalatalization': The Synchronic, Diachronic and Perception Perspectives", by Ryan M. Bessett and Sonia Colina, that gives examples of this alternation in other pairs of related words, such as

"When diachrony meets synchrony: Phonological change, phonological variation and Optimal Paradigms", by Clàudia Pons-Moll, mentions that aquel and el have a palatal consonant not only in their feminine forms, but also in their masculine plural forms: aquellos and ellos (p. 18). In contrast, don and desdén have plurals with non-palatal [n]: dones and desdenes.

There seems to be a lot of linguistic literature about how exactly to analyze the historical patterns of alternation, and to what extent the alternation is related to currently active as opposed to only historical rules of the Spanish sound system. If you're interested in a deeper look at that kind of thing, you could read either of the two linked papers or some of the works that they cite. (I have only skimmed them.)

We have a question and a tentative answer about how don and doña came about. The answer is mostly intended to clear up why these did not diphthongize as in dueño, a, but at the end of the accepted answer there's an explanation of the differential palatalization, which boils down to the fact that the final -e of the masculine form was regularly dropped, leaving the consonant as final, and Spanish doesn't allow either of its two palatalized consonants (ll and ñ) to appear in the syllabic coda.

Aquel, aquella and the rest of those seem to have been the product of the merging of a locative particle *accu- with the respective Latin demonstratives with the stem ill- (ille, illa, illud, etc.), which of course gave us also the personal pronouns él, ella, ello and, in their unstressed forms, the definite articles el, la, lo. 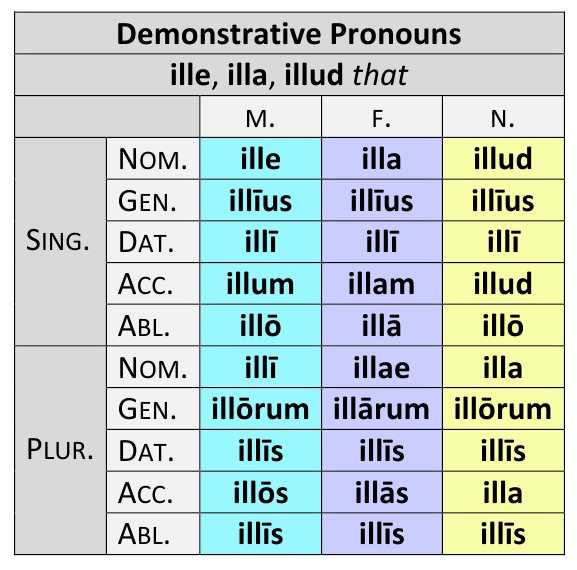 The same reason as above holds here: final -e was dropped from (accu-)ille. I don't know if that was before or after geminate ll palatalized. If it was before, then final ll was simplified to l without any chance to palatalize. If it was after, then palatalized ll was neutralized back to l because Spanish doesn't allow it in the coda. So it was either of these:

There are probably a few other pairs like these, but I could only find:

Not the answer you're looking for? Browse other questions tagged pronunciación género consonantes or ask your own question.

8
Convention for group-recited, gender-specific, self-referencing pronouns
6
Why, when, and how did vowels E and I get special treatment from consonants like C,G & Q?
10
Identifying masculine and feminine words
9
“Empanada”, “Emparedado”, and their genders
7
Is “número” masculine or feminine?
4
I see evidence that “las fieras” is more frequent than “los fieros.” If true, why?
7
Which feminine words end “-o”?
2
Errores ortográficos con consonantes en ejercicios de comprensión auditiva: p/b/v, r/l, d/t, y/ll, c/qu/g, c/s