Were there any rules to write accent marks in Spanish before the creation of the Academy?

I have just noticed this in the original edition of the Quixote from 1605: 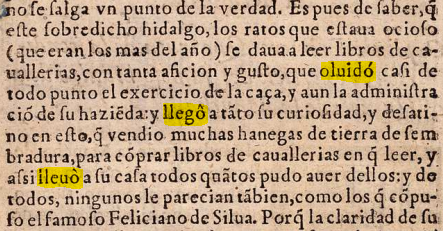 These three words, olvidó, llegô and llevò are marked with different types of accent marks, even though they are formed by applying the same conjugation to different verbs (and hence they must have been pronounced in a similar way as we do today). The only thing that differs is the last consonant before the final o that may be affecting the type of the accent mark.

So it is clear that the Spanish language had the same three kind of accent marks that present-day French has, but how were they used? The Royal Spanish Academy did not exist at the beginning of the 17th century, so were there any rules about the use of those three types of accent marks? Were they used for the same purpose as it seems in the image, or were there differences between them? What orthography books existed by then? Or maybe what we see in the image is just a capricious choice by the printer of the book?

historia acentuación rae
Share
Improve this question
edited May 3, 2019 at 15:47

The following paper gives a pretty comprehensive overview of the topic in its fourth section:

IV. Early Use of the Written Accent in Spanish

In general, the accent mark was not employed in manuscripts in Spanish or Spanish books before 1550. It was only after the Italian and French models had been created that the widespread use of accent marks began to be practiced in Spanish. Between 1475 (the approximate date of the introduction of printing into Spain) and 1566, the use of accent marks was negligible. The 1477 Doctrina christiana, printed in Seville, contained a few grave accents on justícia and fortuíto, but after that until 1566 the use of accent marks was rare. After 1566, accents began to come into general use, and by 1570 the grave, the acute, and the circumflex had appeared, in a sporadic but increasing frequency, in printed books (Douglass 1964: 110-12).

In the late 1560s, forty years after the French and nearly sixty years after the Italians, the Spanish began using accent marks with increasing frequency and consistency. The grave accent (`) was the first to be used beginning in the period 1566-1575. It was used on the monosyllables è and ò (conjunctions), à (preposition), and on word-final accented vowels, as in dexò (note the Greek model). Late in the sixteenth century, the acute accent mark temporarily took over the function previously served by the grave on monosyllables, and was also used on the penults of words that could be accented either on that syllable or on the word-final syllable (hállo, ésta). When the final vowel was accented, either the grave or the acute would appear.

The acute was especially strong between 1650 and 1676 on word-final syllables and monosyllables (vió, dexó), and the circumflex accent, often used in place of the grave in word-final position (dexô, procurarê), enjoyed a limited popularity between 1568 and 1690. The general trend, however, was to use the grave between 1626 and 1726. A favorite use of the circumflex was on the word fê to indicate the previous spelling fee, in the imperfect of second and third conjugation verbs whose stems ended in a vowel (traîa, veîa), and on the regular past past participles of that same type verb (leîdo, traîdo). Note how this use coincides with the Greek notion of rising and falling pitch.

Not the answer you're looking for? Browse other questions tagged historia acentuación rae or ask your own question.

20
What are the accent placement rules in Spanish?
1
Is there a difference between "mítad" and "mitad" as the Spanish word for "half" in English?
10
Are there any dialects of modern Spanish which preserve a phonemic distinction between b and v?
5
What euphemisms were there in Old Spanish to speak about the sexual act?
5
Are there any Spanish words with multiple accents?
11
What were the old Spanish names for "sábado" and "domingo"?
6
Did the Spanish Civil War influence in any way the contents of the RAE's dictionary?
3
When did the medieval contractions that used the 'tilde' fall out of use?