How to pronounce the consonants "y" and "ll"?

I have heard y/ll pronounced in two different ways:

Do native speakers use both interchangeably? Or is it pronounced [j] in some regions and [ʒ] in others?

For people learning Spanish, is there one pronunciation that would be preferred over the other?

See the Wikipedia article on yeísmo, which includes maps of the pronunciations. To summarize:

Note that some specific dialects, like Rioplatense, pronounce their merged /ʝ/ as [ʒ] or [ʃ].

The RAE's Diccionario Panhispánico de Dudas explains the pronunciation of ll is:

On the other hand, the consonant pronunciation of y is:

I recommend using the voiced palatal fricative /ʝ/ for both y and ll. The RAE accepts yeísmo as proper and its use is widespread.

The second pronunciation you mention is almost exclusively used in the Argentina / Uruguay region and Ecuador. Any other country in Latin America uses the first pronunciation.

How y, ll are pronounced

In >90% of Spanish dialects1, ⟨ll⟩ and ⟨y⟩ represent the same sound /ʝ/ (like an English y) 2. This is probably the sound most learners of Spanish will want to use, unless you want to emulate a specific accent.

These are the various ways the letters are pronounced around the Spanish-speaking world (along with examples of the sounds in English):

Note, these images do not distinguish between yeísmo/zheísmo/sheísmo. 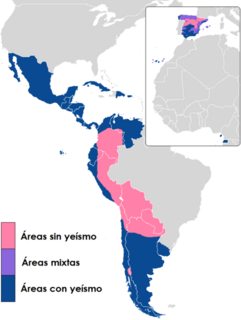 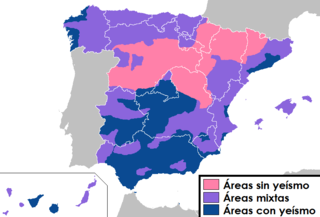 Regions with the merger in dark blue, and regions with distinction in pink.

2, In emphatic speech, word initially, or after an n, m or l, the y sound in Spanish can affricate, sounding as [ɟʝ] (similar to a less 'forceful' version of an English j e.g. jug).
This is analogous to /b/, /d/, /ɡ/ being realized as approximants [β], [ð], [ɣ] in all but these contexts in Spanish.

3. Also found in areas of:
• Bolivia, Colombia, Ecuador, Paraguay, the central Andes, Andean and Northeastern regions of Argentina, southern Chile and the Philippines
• in some rural areas of Castille and León, Castilla-La Mancha, Murcia and Extremadura,
• in some bilingual speakers of la Comunidad Valenciana,​ Cataluña, Asturias, Galicia, Navarra and the Basque Country

It's definitely a regional thing. I was taught that it sounded like the "Y" in Yellow, but I've noticed that people who learned Spanish in Mexico City, sometimes make it sound more like the "J" in Jello. This is especially true for the word, "Yo". To me that pronunciation sounds pretentious and I avoid it.

In general, "When in Rome..." Listen to the people around you and copy the sound they make. If you are going to a particular region, get a hold of recordings of speakers in that area and listen to them before you go.

My bias is to just use your first option for general learning of Spanish. I don't think you'll be misunderstood even by people who use the second option.

Also, to complete what others have said, it's worth pointing out that the /ʝ/ phoneme can be voiced as either an approximant or an affricate /ɟʝ/ (at the beginning of a word or after /n/ or /m/).

Ll is usually pronounced like the "y" in "yellow." There are some regional variations, however.

My Salvadorian friends pronounce both as y as in "yo", as did my Spanish teacher (from Spain).

My Colombian food vendors pronounce both as "zh or j".

In cuba i hear y for the most part for both but have heard "j" for y and in a sportscast I heard one guy pronounce it "bee-ya clara" and the other guy "bee-ja clara" for Villa Clara, so i guess it depends on how their parents spoke.

This differs from region to region, even within countries. I speak Ecuadorian Spanish, and though we have such a small country you can hear the following pronunciations of the ll:

En fin... It's very interesting to see how the language has changed over time. One of the reasons lleísmo has remained strong in Ecuador is that there is lleísmo within Quichua. I wonder if the older languages spoken in the central Andes didn't have /ʎ/ and only [ʒ] and this is why Quichua words like Killa are realized with the [ʒ] in this region.

Anyhow, it's also interesting to see how the language is changing quickly towards yeísmo in all regions, especially with what seems to be a new pan-Latin American standardized conception of an accent rising. We can all choose to pronounce the way we want to, but it's funny, in the United States I do get a lot of heads turned for my [ʒ] pronunciation, especially with Mexicans, who seem to have not heard this pronunciation in their country.

Here in Guadalajara, Mexico, it's often a combination of the two, but tends toward the [j]/yellow pronunciation. Although there are speakers who make a much harder sound.

And it often depends on the word. The name of the town Saltillo is often pronounced (at least here--don't know how they actually pronounce it in Saltillo) with a harder sound than the words ella or amarillo.

English speakers don't have the sounds of Y nor Ll (Actually is almost the same in most places) , except when Y sounds like our i:

In some regions both letters are pronounced in the same way like 's' in "measure". But the correct use is the first one that you mention in your example.

There are a total of 29 letters in the Mexican language. Spanish as taught in most "northerner's" schools is really Castilian Spanish which is spoken mainly in Spain. In Mexican border regions, our "Spanish" is really "Mexican" and therefore castilian taught in schools is useless in Mexico. The single "L" is pronounced as a regular L, the double "ll" is pronounced as the letter "Y" and is actually a separate letter in the Mexican alphabet than the letter "L". Other letters not present in the English alphabet are the double "rr" which is rolled of the tongue, and the "ñ" which is pronounced "enye" comprising the total of 29 letters in the Mexican alphabet. Also, the letter "J" is pronounced as "H", there are no standard "J" sounds in Mexican words just as there are no words using "Y" as in yellow. The letter "Y" is actually the word "and" except as used in the word "playa" which means beach. The "Y" sound is otherwise accomplished using the double "ll".

I speak Spanish Spanish without any regional accent and sometimes I pronounce both sounds exactly the same. Some other times "yo" may actually sound closer to "i + o"

In conclusion, don't worry too much about that, in practice you can pronounce them the same ("llo").

The correct pronunciation of the ll sound is as for the Italian "gl" group, similar to the 'ly' sound in the middle of the word million. Pronunciation anyway varies in countries such as Argentina and Colombia to the second sound described in the question.

The y sound is mostly similar to the long -ee sound in English and is not directly related nor interchangeable with the ll sound.

Not the answer you're looking for? Browse other questions tagged diferencias-regionales pronunciación letras yeísmo or ask your own question.

4
Pronunciation of "ll" in Mexico
2
How do I permanently pronounce the letter 'y' in Spanish?
2
Regional pronunciations of "LL"
0
Pronunciation on "ll" for in the sentence "me llamo"
18
What is the difference between allí and ahí ("there")?
4
"suavecillo" or "suavecito"?
11
Pronounce and distinguish "ñi" and "ni"?
5
¿"Ahí" y "allí" son distinguibles cuando usadas en países donde se usa mayormente el yeísmo?
5
Which parts of México pronounce “ll” (like in tortilla) as “j” instead of “y”?
3
Regional pronunciation of "ll": [j] vs [ʎ]
See more linked questions