Why is "la KGB" feminine?

Reading this question, regarding the use of the feminine article alongside the word Gestapo, I started wondering why, in Spanish, we say "la KGB"? I mean, why do we use la?

KGB stands for Комит́ет госуд́арственной безоп́асности, or in Spanish, Comité para la Seguridad del Estado. If Comité is a masculine word (both in Spanish and Russian), and considering the answers given to the aforementioned question, then I can't explain the wide use of the feminine article alongside the initials KGB.

Well, being the one that pointed the duplicity of determiners el/la in relation with KGB, let me copy my thesis from the original question

I've realized that there is a rare exception to this rule: KGB (in Spanish: Comité para la Seguridad del Estado). I've read both el KGB and la KGB. We can use el taking Comité as its nucleus but we also may use la because KGB is a secret police agency, like their counterpart la CIA. KGB was an agency and a sort of police like the Gestapo so we use la as determiner as well.

@phoog pointed in the comments another exceptional related name: Stasi. Stasi means in Spanish Ministerio para la Seguridad del Estado, that is a masculine name but Stasi uses the feminine determiner la in Spanish. It's just my opinion but I think that the use in both cases, KGB and Stasi, of the determiner la is a consecuence of the historical context, the Cold War, where they both fight against their American counterpart the CIA, being the three of them secret police agencies, agencias de policía secreta, feminine in Spanish.

Last but not least, let me link a NGram that demonstrates both uses of el KGB and la KGB in Spanish books. It seems that la KGB is more common these days (probably due to the presence of her counterpart la CIA as I have mentioned) but you can verify that earlier el KGB was used too when it was properly translated as Comité. 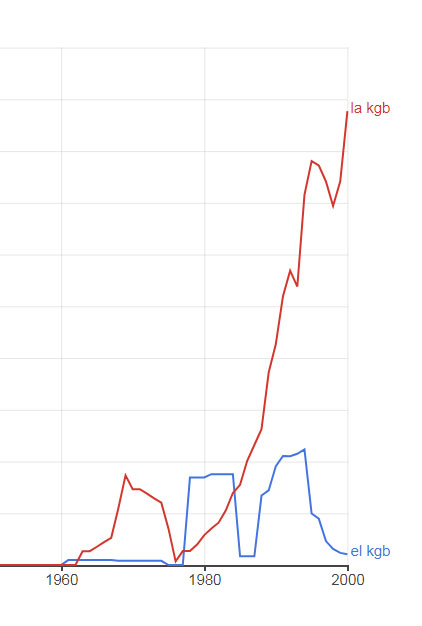 My feeling here is that organizations tend to take the feminine gender because most of them are indeed feminine, beginning with words like

Note that this in turn has to do with the fact that the abstract words ending in -ción, -sión, -dad are always feminine in Spanish.

In the case of KGB, it is absolutely not obvious to the Spanish speaker that this should be feminine, but if you have any idea about the KGB, you'll know that it was either a secret police (policía secreta) or an intelligence agency (agencia de inteligencia) or something in between, and of course both policía and agencia are feminine. If you're also used to talking about other organizations of this kind in the feminine, the similarities in meaning will nudge you towards the feminine gender for KGB as well (Gestapo was mentioned; INTERPOL is feminine as well).

Not the answer you're looking for? Browse other questions tagged uso-de-palabras género artículos siglas or ask your own question.

5
Why is the phrase "¡Hasta la próxima!" feminine?
2
How important is correct usage of el/la in spoken Spanish?
4
I see evidence that "las fieras" is more frequent than "los fieros." If true, why?
7
Is “vigésimo tercera” considered an acceptable alternative to “vigésima tercera”?
3
If the grammatical gender of "archipiélago" is masculine, why do I see so many instances in which it is preceded by a feminine article?
26
Why is "la Gestapo" feminine?
4
What is behind the decline in usage of "carta" as a word for "map"?
7
Using "De él" for a noun