Translation of "bug" to Spanish

What is the best way to translate "bug", as in a misfeature of a computer program or device?

Google translate offers a few options, none of which quite seem to fit, except the term itself:

So I used the word 'bug' in a conversation with someone, but they had no idea what I was talking about. Granted, this person was not a techie, but even the least techie of people will understand if I say "My program has a bug" in English.

How can I communicate the same thing in Spanish?

"Bug" is quite ambiguous in English, because it refers both to the defects in the software as well as to their manifestations that can be seen in the running program. In Spanish we often use "defecto" for software defects, and "fallo" for their manifestations, i.e. software failures.

I'm afraid there's no good translation for bug in that sense. If you are a computer expert or you speak English you know the English word. Otherwise you talk about un error, defecto, problema o fallo en el programa o en el sistema.

I would use the subtleties between "fallo", "falla", "error", "problema"... in very specific context, such as RAMS (Reliability, Availability, Maintainability and Safety).

If asked, you can always explain where does the use of "bug" come from ;)

The professional community in my country (Costa Rica) uses the word "pulga" (flea). I am not sure if this is customary in other regions, though.

If we consider the origin of the history of the "bug" idea, surely we will understand better why this concept has been created.

It all started in 1947, when technicians found that the Mark II computer (at Harvard University in Cambridge, Massachusetts) was in serious troubles: something was causing continuous problems, all the time. And they couldn't find its source.

After a systematic review, they finally found the cause of the crisis: the corpse of a simple moth was causing a short circuit, and with it the problems multiplied!

Once the problem had been isolated, they fixed the bug to the page with tape. In the log notebook, the technic wrote "First actual case of bug being found".

The original annotation is conserved in the National Museum of the Smithsonian Institution: 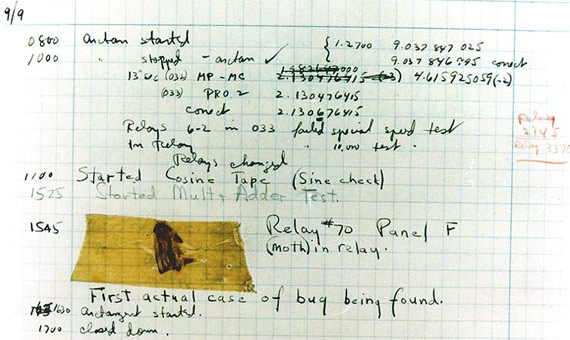 In short: it was the first computer "bug". And therefore also the first "debugging".

This is the reason why in Spanish we translate "bug" both for its physical form ("bicho", "polilla", "insecto", etc.) and for its effects ("error", "defecto").

I saw "pulga" (flea) used like "bug" in an Isaac Asimov book, that had been translated into Spanish.

You could translate this as programming failure. However as many english words have been introduced in the Spanish language due to technology many people use and understand this term. "bug". It is also used to refer when a video game has some kind of failure

Not the answer you're looking for? Browse other questions tagged traducción selección-de-palabras vocabulario modismos informática or ask your own question.

5
What's the most common term in the (software) industry for "to debug" or "debugging"?