Are there Spanish equivalents for “turtle” and “tortoise”?

In (British) English, marine "turtles" are distinguished from terrestrial "tortoises".1 2

In Spanish, both of these groups of reptiles come under the blanket term tortuga.

Are there any analogous Spanish terms for "tortoise" and "turtle"?

Similar to how though "owl" describes both búho and lechuza in English, there exist the more specific terms "true/typical owl" and "barn owl" respectively.

Turtles, terrapins, and tortoises can be identified respectively by the Spanish terms:

Veering into more zoological terminology, you also have:

Notes:
1. In Ecuador, galápago refers specifically to the Galápagos giant tortoise, not terrapins.
2. According to Corominas galápago's ultimate etymology possibly comes from a pre-roman hispanic term for any shelled creature/thing, and that it is cognate with calabazo (pumpkin) and carapacho/caparazón (turtle shell).4
3. The similarly named emidosaurio refers to a group of crocodilians (caimans). This similarity comes from its dubbing as a 'terrapin' lizard (for the ossofied scales on its back resembling a terrapin's shell).
4. There is a surprising variety in the names one can give to a turtle's shell (carapace): garapacho, carapacho, caparazón, carroncho (Hond.), concha, coraza, casco, espaldar & peto/plastrón etc

The confusion between the British, American and Australian usage of the words turtle/tortoise etc1 2 3 stems from the different fauna encountered in each region. Naturally in Spanish too certain dialects have their own words for different species and groups of species of tortuga.

Many of the following terms, though specifically used for certain species, also serve in the dialects where they are used (via metonymy) as synonyms for any tortuga or any sea-turtle/river-turtle/tortoise:

Before going any further, I can't escape a tiresome point of terminology, and a regrettable vindication of George Bernard Shaw's observation that 'England and America are two countries divided by a common language'. In Britain, turtles live in the sea, tortoises live on land and terrapins live in fresh or brackish water. In America all these animals are 'turtles, whether they live on land or in water. 'Land turtle' sounds odd to me, but not to an American, for whom tortoises are the subset of turtles that live on land. Some Americans use 'tortoise' in a strict taxonomic sense to refer to the Testudinidae, which is the scientific name for modern land tortoises. In Britain, we'd be inclined to call any land-dwelling chelonian a tortoise, whether it is a member of the Testudinidae or not (as we shall see, there are fossil 'tortoises' that lived on land but are not members of the Testudinidae). In what follows, I'll try to avoid confusion, making allowance for readers in Britain and America (and Australia, where the usage is different again), but it's hard. The terminology is a mess, to put it mildly. Zoologists use 'chelonians' for all these animals, turtles, tortoises and terrapins, whichever version of English we speak.

As you can see from this diagram (p.177), aquatic chelonians ("turtles") is not monocladistic: 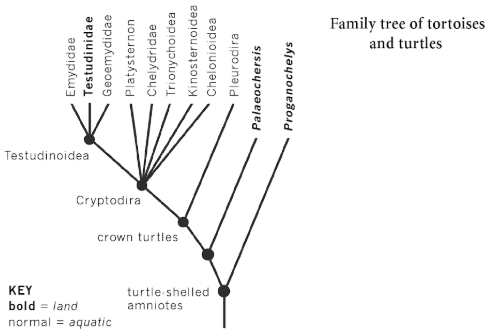 Not the answer you're looking for? Browse other questions tagged solicitud-de-término animales terminología ciencia polisemia or ask your own question.

13
Is there a name for words having two opposite meanings?
4
Spanish names for preterite and imperfect tenses
35
Are there other words in Spanish that can't be written? (like sal-le)
10
Are “burro” and “aburrir” related?
1
Are there no gophers in Spain?
7
Distinguish between “to quote” and “to cite” in Spanish
5
What's Spanish for “party favors”?
3
What other terms are there like yeísmo and betacismo?
9
Are there any non-binary pronouns or neopronouns in Spanish?
6
Translation of “the asker”