For examples, I have searched on Google Maps and there are streets named Via Rojo in California and Texas. There is a Calle Rojo in Tembleque, Spain and a couple in California. Calle Blanco in Puerto de la Cruz, Spain, a few in Mexico and California.

Here a some links to pictures of the road signs: 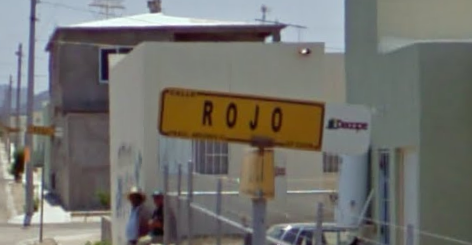 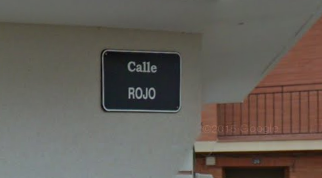 Note that many streets are named after people. Sometimes names coincide with adjectives. For example, you might have the Calle de Javier Rojo Gutiérrez. Over time, people call it Calle Javier Rojo Gutiérrez by juxtaposition, and eventually Calle Rojo Gutiérrez removing the first name, and then just Calle Rojo by getting rid of the second last name. But seeing the progression, it becomes obvious that this is just a last name, and not intended to be a color (and in fact both Rojo and Blanco are indeed last names).

It doesn't just happen with street names. In New Mexico, there is a city called Los Lunas, which likewise seems incorrect, but in Spanish, when talking about a family, you just place "los" in front of it (hence "Los Simpson"). It just happens that there was a family named Lunas, and so the city ended up being called Los Lunas after the family, and not the celestial object.

This is more of a comment but it wouldn't fit that format, so... You have to bear in mind how street names are formed. There's no uniform rule in all Spanish-speaking regions about that. Some street are named by qualifying the noun calle or avenida or vía, etc., with an adjective or a subordinate phrase (typically beginning with de), such as

In these cases, when an adjective follows, there should be grammatical agreement as you've noted. That is, if instead of Avenida Costanera you wanted to say Bulevar (a boulevard), you'd say Bulevar Costanero, since bulevar is masculine.

But sometimes streets are simply named to homage someone or something. That works as if you were putting quotes about the name, i.e. the name of the street is just calle (or whatever) plus the label you've chosen, in literal form, without change.

In some places this way of naming streets (which I'd call "the quoted street name" approach) is not so common, and an alternative is used: the street is named calle (etc.) plus de plus the proper name. In this case people might tend to use the full calle de X format to refer to the street.

Not the answer you're looking for? Browse other questions tagged gramática género or ask your own question.

8
Rules of style for Spanish
20
Why do Spanish words have gender?
14
Mismatching word gender in Spanish
6
How can I generalize Spanish translation of object names' gender?
3
Gender (or not) of demonstrative pronoun with explicit object?
4
"A esto se le llama ..." What grammar rules does this follow?