Translation of “Then open the door”

I was just in Albuquerque, New Mexico and riding a local bus. The door had a sign saying (in English and Spanish)

Wait for Light Then Open Door

Aside from the comma missing in the English text, I am confused about the use of Haber instead of Abrir in the Spanish text. To me it seems to say Then there will be the door (except that then technically it should be habrá).

Is this a mis-translation? Or a use of Haber that I am not familiar with? Or perhaps a regional usage of Haber? 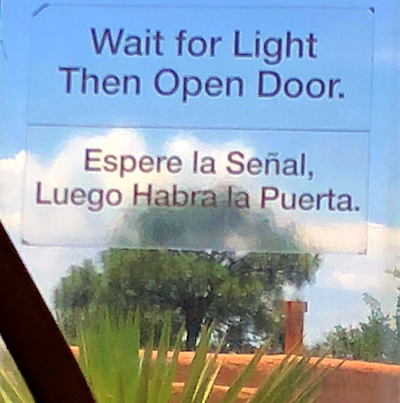 You are right. "Habrá" means "there will be"

The sign is wrong. The word should be "Abrir"

Also the use of the capitals is incorrect.

Correct alternatives would be:

In any case the correct word is abra

What was meant was

Confusion about which words take a silent H and which don't is extremely common among Mexicans, Mexican Americans and Chicanos. If someone has a little trouble with this aspect of spelling, by no means can we assume the person is ignorant, stupid or uneducated.

There is a certain charm in this sign. It is written in a natural way, and reads like it was designed by someone bilingual. A scenario that suggests itself is that the person who wrote it works at the bus company, was raised speaking Spanish at home and some other settings, but had formal schooling primarily or entirely in English.

A native speaker of Spanish will imagine the sound of the word and parse it accordingly. Learners of Spanish understandably lean more on the written letters to figure things out, and might find it confusing.

Regarding the capitalization: In English it's normal to use title case for signs; it's only natural that a bilingual sign carry that over to the Spanish. See https://ux.stackexchange.com/a/28299/69183 (regarding headings and instructions in websites: "Title case propagates in Spanish pages because it's easier to write and because of the influence of the USA sites").

Not the answer you're looking for? Browse other questions tagged traducción verbos estados-unidos or ask your own question.