If someone needs to learn how to say "Don't touch" using the formal command, which should be used: "No se toca", or "No se toque"?

I recently came across the phrase "No se toca" over at Reverso. Had I not seen so many instances of this (both at Reverso and in a regular Google search), I would have thought that it was some sort of translation mistake. In fact, there are far more instances of "no se toca" than there are of "no se toque" at least on web pages (about 20 times more) and books scanned by Google: 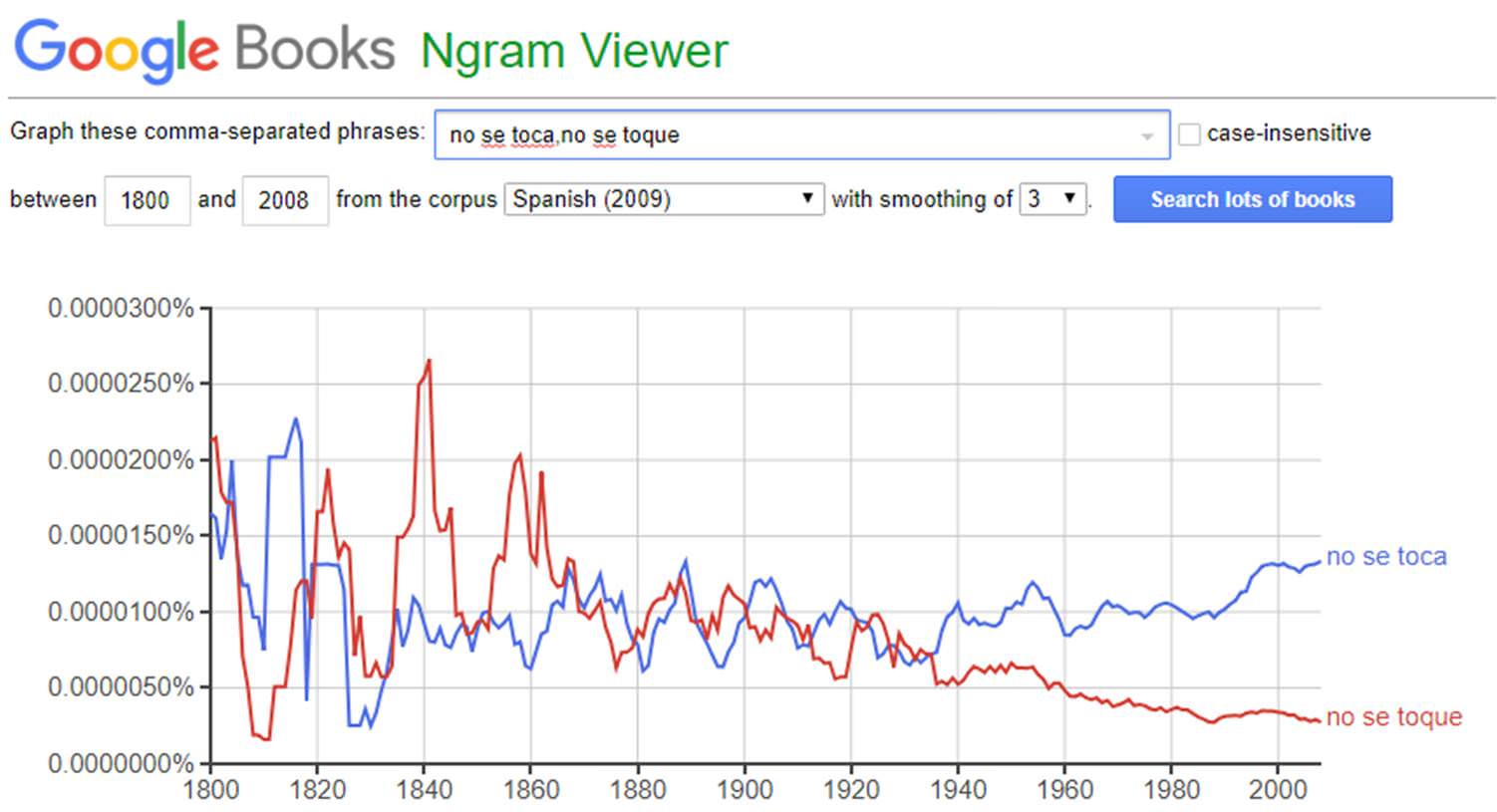 Granted, many of these might be instances of passive voice rather than the imperative, but the examples at Reverso clearly show that this combination of words is closely related to the command and that it is more commonly translated as such. Is this considered standard Spanish? Will I find other exceptions to standard rules of command conjugation?

"is not for touching"

as "no se toca" leans more towards the idea that something specific should not be touched. Also, it is a Declarative, not an Imperative, making "don't touch" invalid.

"Don't touch" should be just translated as "no tocar", but it will change depending on who you are giving the command to.

So answering your question

"No tocar" and "No se toca" and "No toque/toques" are three completely different cases.

(you) don't touch the jar

(formal you) don't touch the jar

the jar is not for touching

Let's paint the scene. You are a guard at a museum, or you are a parent guiding a small child, during a visit to someone's house or office. In both cases, a gentle but firm way of getting your idea across is indeed

In many cases the specific object is spelled out, e.g.

This is gentler than "No toques" because it makes clear that the constraint is for everyone, not just for the one person. It's a gentle, firm way of explaining what is done, what is not done, what behavior is expected in the particular situation.1

It's also possible to say

Notice how the subjunctive is introduced with "que." However, a museum guard would not say that; and your host might say that to the adult, but not to the small child.

If you want to use the imperative, which you certainly could do -- it would not be grammatically incorrect -- it would be without the "se":

No toque (formal) / No toques (informal)

If you were to say, in the formal, "No se toque," that would mean "Do not touch yourself." Perhaps you were intending to include a direct object pronoun. In that case, the correct pronoun would be "lo": "No lo toque / No lo toques."

And that could certainly be said. (It sounds a notch less gentle.)

More generally: yes, "No se toca" is indeed standard Spanish; here are some examples of behavioral expectations given with some other verb form than the imperative:

As you can see, there is plenty of variety available, that will help you avoid sounding like a drill sergeant (barking orders).

Note, all of the above examples that I gave in the informal (tú) can also be expressed with the formal (usted). The museum guard, for example, would probably use the formal, at least with adults.

1 Editorial comment: this is one of the things that makes Spanish a more user-friendly language, culturally speaking, in my personal opinion, than another second language of mine, German, which says that riding your bike while your dog runs alongside, on a leash, is verboten (forbidden). In Spanish this would be No se permite (not allowed), although in Mexico, at least, there are much fewer rules, in general, than in Germany, and so frankly I can't even imagine anyone ever saying this.

Both are correct. However, the difference in declension for this statement arises from using a different mode of address

are both instances of the formal mode of address, the first being a passive voice as no explicit subject is the recipient of the order not to touch.

The second one is an imperative proper using an implicit subject (it's understood between parties to the conversation what is not to be touched, the sentence itself carries insufficient information to make such a determination which would have to be inferred from context by an uninvolved third party) while this sentence makes clear that one of the participants in the conversation is not to touch that preciously agreed to object)

Could be easily mistaken for a plural of several touches except the plural forms don't agree between lo and toques.

Los toques would be a proper plural except that it's nonsensical to negate a set of touches, rendering necessary a different explanation for the meaning of such a phrase.

In this case we are looking at the informal mode of address, opposite to the formal no lo toque that final /s/ in the declension diffuses the rigidity and deference of the first case and conveys trust and familiarity between the parties to the conversation regarding the agreed rule not to touch an understood object.

Often modes of address bring subtle but important changes to some phrases. Some may even have different intended meanings depending on the mode of address.

It is a difficult subject to convey in translation since there is no such concept in the English language. This makes for interesting challenges to students of Spanish as a foreign language and is one of the most difficult aspects to translate. In English, most of the time formality is resolved on verbosity, thus simple phrases are thought of as informal while verbosity approaching legalese has a "formal" sound to it.

Not the answer you're looking for? Browse other questions tagged traducción imperativo or ask your own question.

6
How is "layout and design" translated into Spanish?