What are the three systems of pronouncing "c"?

diferencias-regionales españa pronunciación ceceo-seseo
Share
Improve this question
edited May 2 '18 at 14:56
aparente001
asked May 1 '18 at 21:26 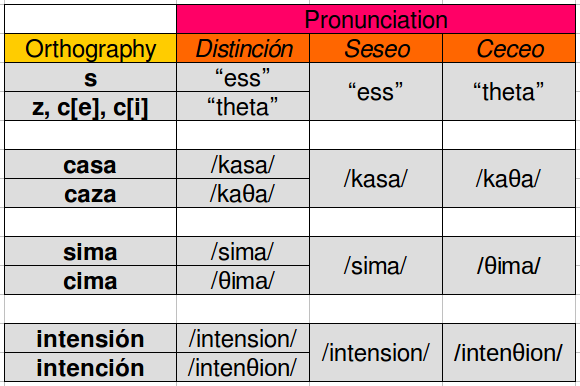 12
Distribution of Spanish speakers regarding 's' and 'c' pronunciation
5
If certain words undergo a spelling change from "z" to "c" in order to preserve the soft sound of the "z," is there a "hard z" in Spanish?
5
Ceceo vs Seseo vs "distinción" - which school to follow?

15
Audio maps of Spanish dialects?
8
Is there a difference in the pronuciation of a single vowel or multiple vowels in a row?
5
Ceceo vs Seseo vs "distinción" - which school to follow?
6
Is pronunciation of letter 'x' before consonant as [s] is obsolete?
3
What is the correct pronunciation of "espontaneidad?"
3
What other terms are there like yeísmo and betacismo?
4
How to show two vowels are pronounced in hiatus (e.g "tri-A-da" not "TRIA-da")?