What is the difference between "catedrático," "docente," "maestro," and "profesor?"

Earlier this year, I prepared to take a DELE exam, more specifically, the DELE B2 exam. Feeling a bit nervous about my abilities in the month prior to the exam, I splurged on some preparation books published by Edelsa. Though I did not get a chance to cover them quite as thoroughly as I would have liked, I continue to use them for study from time to time. I find the vocabulary section in the one titled, "Preparación al Diploma de Español Nivel B2," particularly useful. Even though it does not provide English translations, it has brought my attention to useful and current words and phrases I might not have encountered otherwise. It was during one of my sessions with this book that I began wondering what the differences are between the following:

Unlike my other inquiries here, I actually came upon some resources that helped further develop my understanding of each of these. Since the answers I found come from multiples sources, most of which are in Spanish, I've decided to add what I discovered in an answer to this post, but if any of you have something more to add, or dispute any of my findings, please post an answer and/or comment of your own.

catedrático
This appears to be a professor, but not a generic word for professor. From the definitions I’ve read, this refers to a special type of category of professors — those who have reached the highest status at a university (but this can also refer to those at a high school). The gist I get from this definition that I got from the Diccionario de la Real Academia Española (DRAE) is that a “catedrático” is akin to at least a full-time professor, not an associate professor or an adjunct professor, and quite possibly this title is reserved for those who have tenure. This notion seems to correspond with information I found later on a Wikipedia page titled, “Academic ranks in Spain.”. It is part of a larger page titled, “List of academic ranks.” It contains links for 75 other countries in addition to Spain; 7 of these 75 countries are Spanish-speaking countries — Argentina, Colombia, Costa Rica, Cuba, Mexico, Peru, and Venezuela). The only one among these that I see that refers to a “catedrático” is Costa Rica as in “Profesor Catedrático” and it refers to a “titular professor” (something below an emeritus professor and an “associated* professor). I do not know if any of the 14 Spanish-speaking countries not referenced by this page use “catedrático” among their terms for academic rank. (If you happen to know and/or want to set up a page for the academic ranks of your country, I am sure Wikipedia would encourage it and many others would appreciate it.)

*I think this may be a typo for “associate” professor.

docente
Appears to be more often used as an adjective than a noun. In fact, the DRAE only lists this as an adjective for teaching, but despite that, you will see use of “docente” refer to a teacher even in Spain’s paper of record — El País (see below).

After a review of academic rankings by country (as found on Wikipedia), only a couple of countries (Colombia, Costa Rica) appeared to make special mention of “docente.”

In Colombia, there is a distinction between a “profesor universitario” and a “docente universitario.” A quick glance at the Wikipedia page, “Academic ranks in Colombia” seems to indicate that becoming a “professor” in this country may be difficult and competitive, but worthwhile, whereas a “docente” is, perhaps, a position one takes on the way to becoming a full-fledged “professor” and can take the form of an “associate” or “adjunct” professor (to provide something of a U.S. equivalent).

In Costa Rica, you will find a “Docente de Emergencia.” I did not find any resource to back this up, but it seems likely that this would be the equivalent of a “substitute teacher” in the U.S. The word “docente” also applies to auxiliary teachers and lab assistants in Costa Rica. In the U.S., I think you would refer to these types of teachers as “Teacher Assistants/Helpers.”

maestro
From the Latin root “magis,” meaning “more” or “great.” (Source: Wiktionary entry for “maestro.”) As I understand it, in Spanish, this is just a generic word for "teacher," but can also mean “master.” It is a word that is actually found in several different languages, all with slightly different meanings, but at the core of them all is a meaning of someone who has mastered something.

profesor
I’ve kind of already defined “profesor” when I attempted to give a description for “catedrático” and “docente.” Like “maestro,” this is a word that can be used somewhat generically (but perhaps a bit less so) and in certain contexts, it can have a very specific meaning. Generally speaking, however, this tends to refer to a teaching position at a university. It can also refer to a teaching position at a high school, but I sense the word is mainly reserved for those who teach at an institution beyond “la escuela secundaria.” A recent glance at a Univision headline has me second-guessing myself on this, so if any native Spanish speakers know for sure, please comment.

While doing this research, I stumbled upon two other synonyms for “teacher,” so I decided to add them to this post. They are below:

enseñante
Only listed as an adjective in the DRAE.

educador
This is usually translated into English as “educator.” It is a word that is more formal and less generic than “teacher.” According to Wiktionary, it defines someone who is “distinguished for his/her educational work.”

Lastly, allow me to share with you two more things that might illuminate these words a bit more. The first is an image of the Google Ngram I ran for these words: 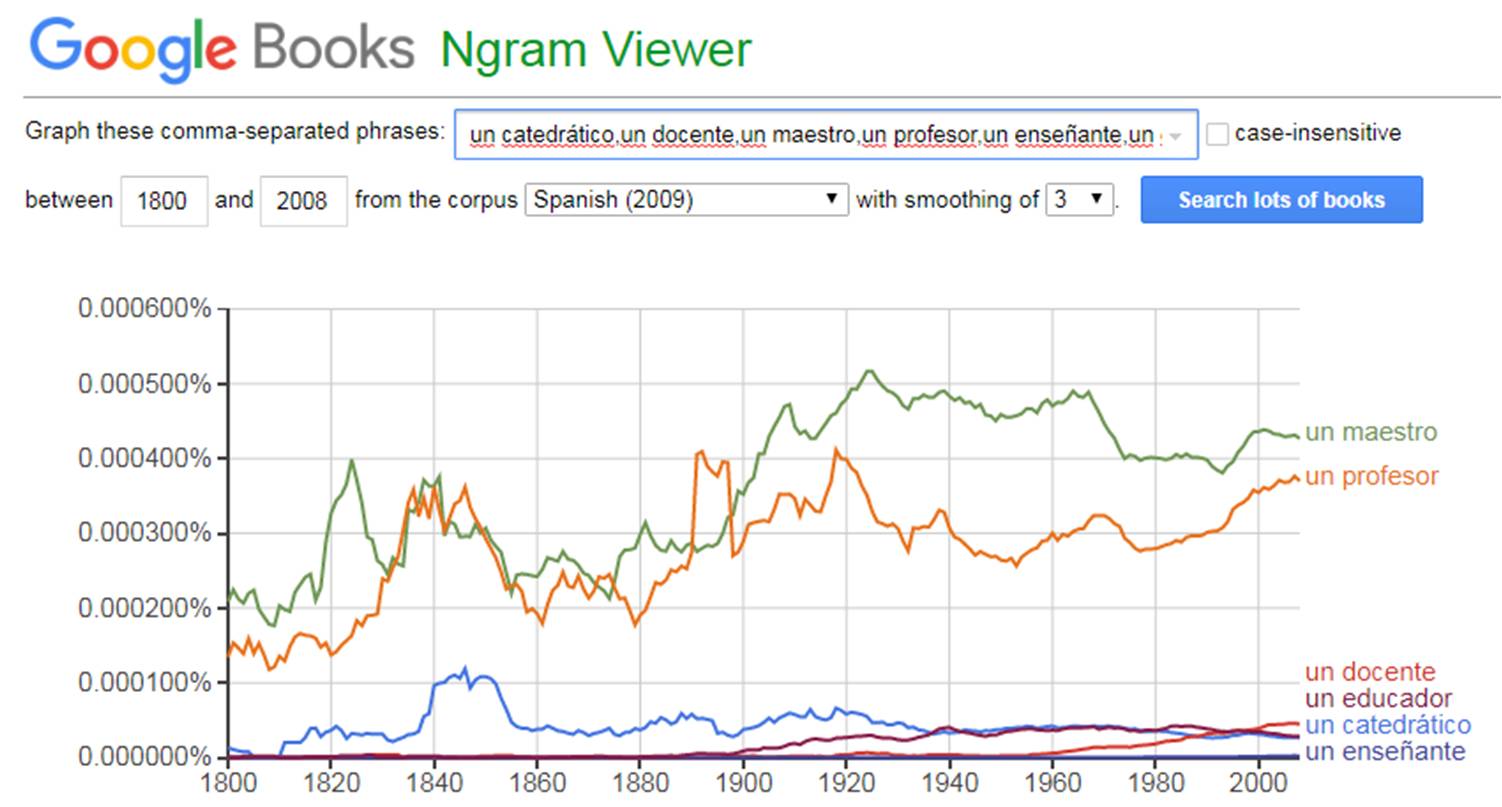 And lastly, is this article here, which really was the catalyst that took me from I don’t really know the difference between these words to maybe I should do some research and share what I learn. The article provides what I think is more of a philosophical approach to the differences between some of these words rather than the dictionary meaning/common application I tried to lay out, and because of that, you just might enjoy it more than anything I've written above.

Just to add to Lisa's extensive research my experiences as a frequent visitor to a Spanish university medical school a few years ago. There would only be one catedrático in a department so it would correspond to what in the UK at that time we called a professor. The next level down of senior figures were profesores titulares. Below that they were profesores ayudantes or asistentes. I was always introduced to people as profesor de bioestadística even though my colleagues knew I was not entitled to the rank of professor in the UK at that point being a senior lecturer. When challenged in staff areas in the hospital I always said Soy profesor visitante which empirically seemed to satisfy people. I never heard any of the other terms you mention used for anyone else in the university medical school.

In a comment which has subsequently been deleted @moo pointed out that there can be more than one catedrático in a department so my statement above is not true now. Unfortunately I have lost the link @moo provided which gave the source of the information.

Not the answer you're looking for? Browse other questions tagged uso-de-palabras sinónimos or ask your own question.

1
When and why did "a" begin to precede "menudo" to indicate that it means "often"?