How do you say "spread" in Spanish? [closed]

Want to improve this question? Update the question so it's on-topic for Spanish Language Stack Exchange.

The poison spread out all over her body.

You can use a dictionary in order to translate spread. I just used wordreference and got a couple of decent proposals, like extenderse and difundirse.

The different connotations between all these verbs (extender, propagar, difundir) could be another question or an important part for this question, but you can see how the dictionary/translator already suggests propagar as the favored use with "illness" (since the connotation is propagate instead of extend, display or smear) 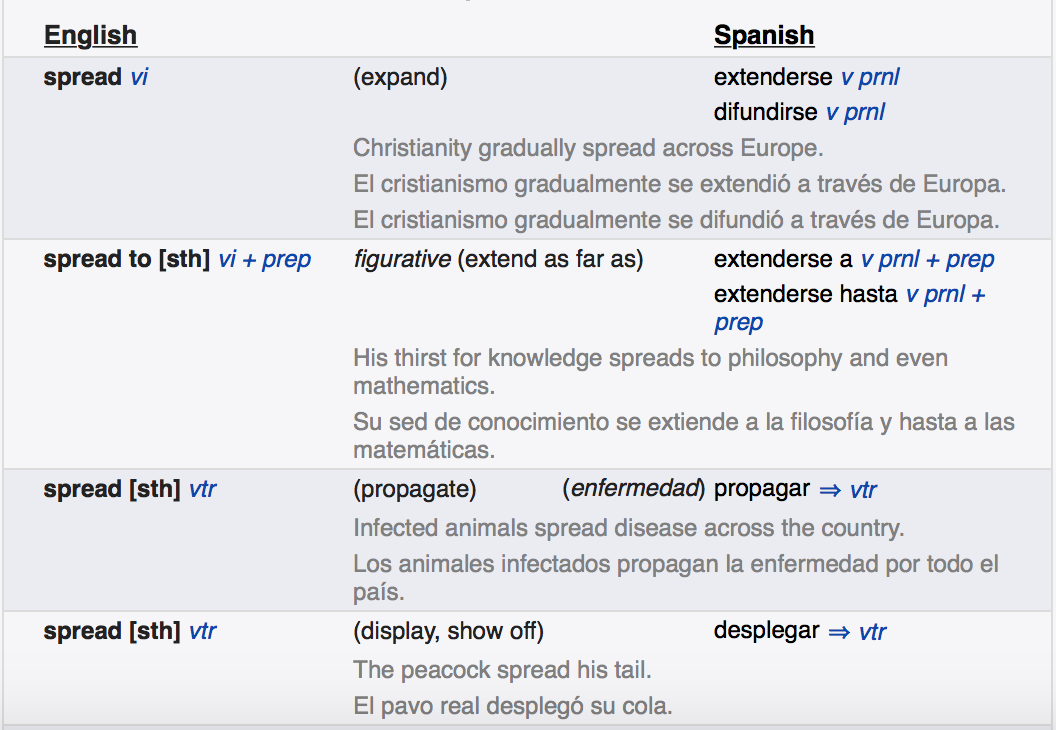 The most interesting part is that, as you know, the infinitive of a verb in Spanish ends with either -ar, -er or -ir, and that's it. Why then "extenderse" or "difundirse"?

Well if we look more carefully at the definition provided by wordreference (or any other decent dictionary), we notice a small "prnl" near the verb. That means it is a pronominal verb.

So pronominal verbs must be conjugated with a reflexive pronoun, like se.

It is trickier than that, because you see in the examples:

Propagate is not pronominal, but is a transitive verb (A transitive verb is a verb that can take a direct object. In other words, it is done to someone or something. In some cases the agent is the one that receives the action). In your case it is the illness what spreads "itself" all over someone's body. That is why it has that reflexive meaning. Thus, you need to say

You can recognize pronominal verbs by the reflexive pronoun se tacked on to the infinitive: ducharse, ponerse, lavarse, quedarse, etc. I showed a couple uses of propagar, with and without the se. I hope this doesn't add confusion. There is a lot that can be said about pronominal verbs but I just wanted to highlight why you would need to use it in this case, to refer to the poison spreading.

Spanish is a idiom that have a lot of synonyms so you can use se (propagó/difundió/diseminó/extendió/esparció) all these will be well with you phrase.

Maybe you are thinking why use se before the verb (se extendió). This word in this case is a reflexive pronoun This meaning that the word suggest the action is do itself.

Not the answer you're looking for? Browse other questions tagged traducción vocabulario se verbo-pronominal or ask your own question.