"Shovel" and "spade", are both translated as "pala"?

I have translated both "shovel" and "spade" into Spanish and I got the same result: "pala". Is my translation wrong? How do Spanish people differentiate between them (one word for two different things)?

An image with the differences: 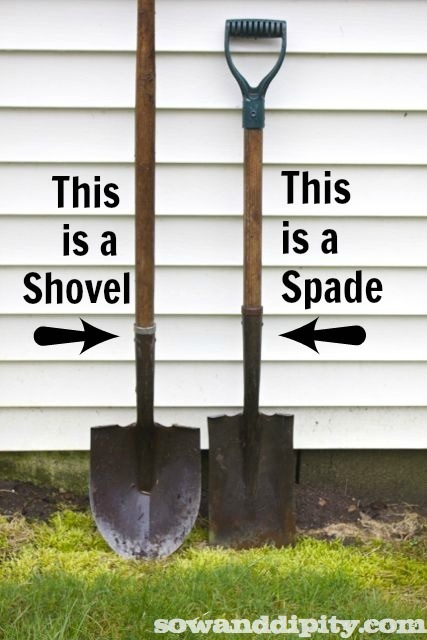 And an article explaining the differences: http://gardeningproductsreview.com/shovel-vs-spade-whats-difference/

Short answer: We usually don't differentiate them, and when we do, we are likely to say something like "the pointy shovel" instead of calling a spade a spade.

Long answer and justification: According to the wikipedia article for Shovel, a spade is a type of shovel:

A general category of shovels tailored to digging hard ground that must be broken with substantial force before it can be moved. Most spades have sharp or nearly sharp edges, often shaped as triangular points. (The typographical spade symbol, ♠, is a stylized icon derived from this idea.) Some spades lack triangular points but are fairly narrow. They are tailored to lawn cutting and to transplanting of bushes and small trees. In fact, their modern mechanized equivalent is also called a tree spade.

Notice how the article has a link to the Spanish version (check the "languages" section on the left sidebar to access versions of the same article in different languages), which is called "Pala", but the article for Spade does not have a Spanish version.

By the way, in playing cards, we call the ♠ suit the "pica" suit, which means "pick" (the pointy tool used for mining).

Not the answer you're looking for? Browse other questions tagged traducción uso-de-palabras vocabulario or ask your own question.