What's the difference between “ave” and “pájaro”?

What's the difference between el ave and el pájaro?

My Spanish class has used them both for the same bird and it really has me confused.

Are they the same thing? Or do they have distinct differences?

uso-de-palabras español-neutral animales
Share
Improve this question
edited May 21 '18 at 7:56

Pájaro is the more common word, and is usually reserved for small flighted birds. Though you can use pájaro to refer to a larger bird too, it may sound something analogous to calling a shark a fish.

Ave on the other hand has a scientific or poetic flavour to it, and is usually reserved outside of these contexts for all birds that one wouldn't call a pájaro i.e. large birds or flightless birds e.g. an eagle or penguin. Calling a starling, for example, an ave might sound akin to referring to a dog as 'the mammal'.

Scientifically, Ave refers to any animal in the class of birds (i.e. one of the 5 classical divisions of the vertebrate animal kingdom: Mammals (Mammalia), reptiles (Reptilia), birds (Aves), fish (Pisces), amphibians (Amphibia)), and thus any bird is referred to as an ave. As such, it is used in the names for most groups of birds and some common names:

Pájaro, in a zoological context, refers specifically to passerines (Passeriformes) - the largest order of birds, encompassing over half of all species. They're characterised by their toes (three pointing forward and one back), and are more or less synonymous with 'perching bird' (or, somewhat less accurately, 'songbird'): 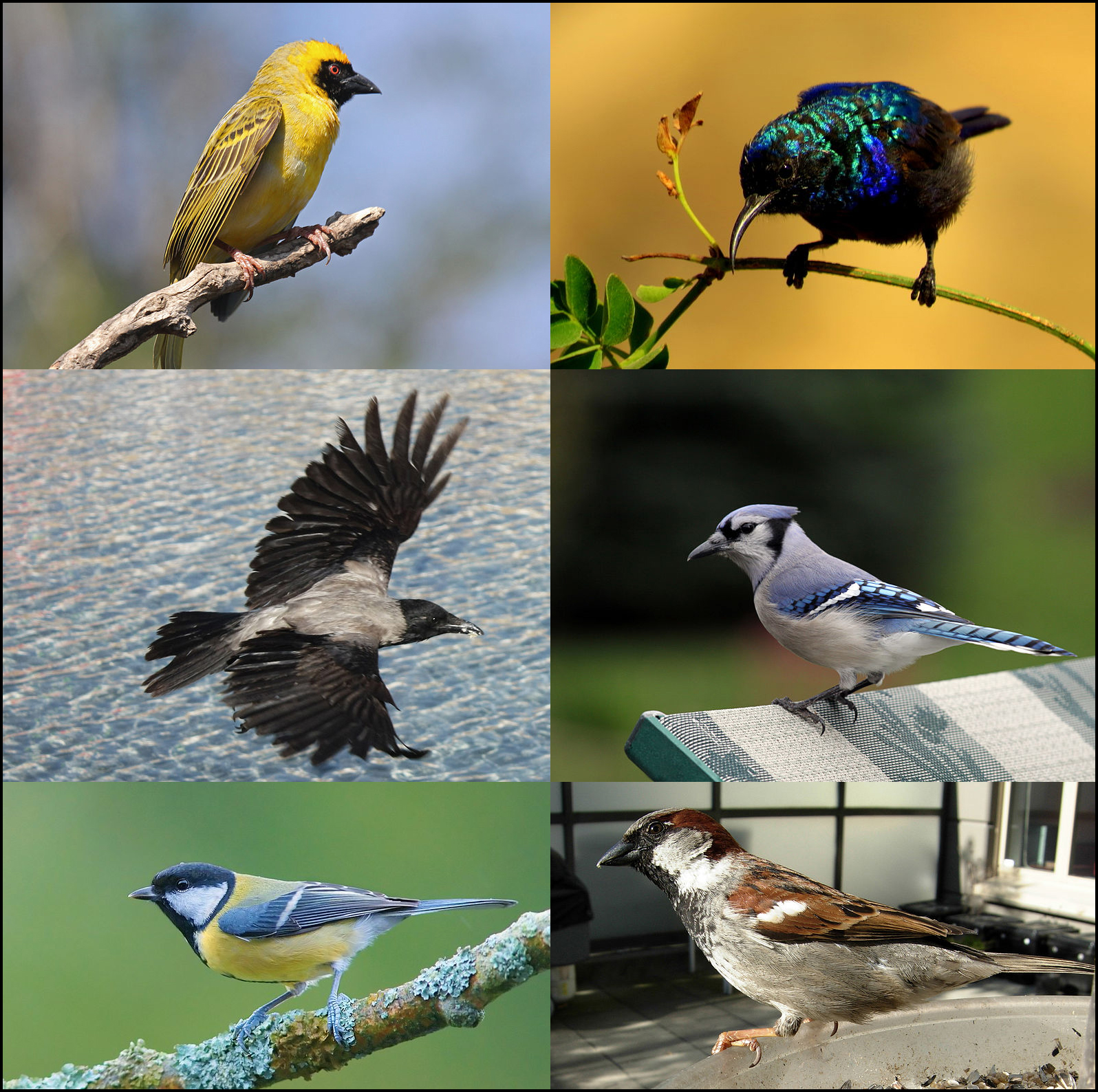 As is apparent from their etymologies:

historically, ave was the common word for any bird, and pássaro/pájaro was reserved for small birds. However with time, pájaro metonymically came to take on the meaning for any bird as well, with ave retreating somewhat to a more scientific gamut.

Due to these overlapping definitions and usages (and the huge variety in native bird populations in different hispanophone countries), different dialects of Spanish may use different terms for the same bird e.g:

This Wikipedia entry is both for "ave" and "pájaro". Thus, both terms mean "bird", being used "pájaro" more for the smaller ones.

On the other hand, "Aves" is the name of the class "Birds" in Biology.

Imagine ave and pájaro are two opposite ends of a scale where you can place any bird. As you go from end to the other, your calling that bird ave or pájaro will signal more or less of certain features. For example:

First, Ave is the formal word and the one used in Biology. So, like others have said, a penguin and a kiwi are aves, but I, spanish native speaker, wouldn't call either of them a pájaro.

Second, I know that the RAE definition says it, but at least in Spain in spoken language you can call ALL flying birds a pájaro.
An eagle is a pájaro as well as an ave. The difference with small and large birds is that usually, we call the large ones by the name of the species.
If you see an eagle you usually say for instance:
- He visto un águila

And you don't say:
- He visto un pájaro

And neither do you say:
- He visto un ave

That doesn't mean that you can't use the word pájaro when you are speaking about a large bird, you could say for instance He visto un pájaro enorme por allí, or A Pablo le gustan los pájaros, ¡hasta tiene un águila!, or any other phrase that meets the context and circumstances.

What I'm trying to say is that it's not like a forbidden use of the word, it's just a matter of context. Not an easy one for someone learning the language though, since it's very relative and tied to the context.

Aside from the already mentioned distinction (not 100% taxative!) between flying and not flying birds, I'd add that "ave" is a more formal, more scientific and more poetic term, while "pájaro" is more colloquial.

Ave can refer to pretty much anything that flies. Typically though, it's usually associated with animals. I consider the word "ave" to reference such flying animals as a species. Much like how you can call a car a vehicle, but a car is not a truck.

Pájaro on the other hand is associated with the animal itself more than the fact that it can fly. Just as in English, you can call the animal a "bird", but you could also call it what it really is, e.g cardinal, robin, chicken, flamingo, penguin, and so on... they're all birds. That isn't to say though that 'pájaro' can be used to point out a duck, penguin, or whatever.

Pájaro is the little bird in your window, the crow that steals your crops, the animal eating from the bird feeder.

Not the answer you're looking for? Browse other questions tagged uso-de-palabras español-neutral animales or ask your own question.