What is the difference between "sueldo" and "salario"?

I have translated "salary" into Spanish. I have found two translations. What is the difference between "salario" or "sueldo"?

In Italian there are also two translations of salary, one means the actual amount of money and the second one is used without the amount, and is usually accompanied by an adjective. See the definitions in the RAE's Diccionario de la lengua española:

What is the minimum salary in this country?

Though there may be some practical differences, let's stick to what the DRAE says:

If you look closely, the first meaning in salario does not say that the amount of money needs to be paid for a professional work, but it does in the definition of sueldo. For instance, a kid receives a salario or paga from his parents. But in your examples, you can go for any of the two options (or the three if you count paga, though it sounds a bit childish to me), as long as you are talking about an amount of money you earn regularly for a professional work.

But I must insist this is in theory. In practice there may be differences varying along the Spanish-speaking regions.

According to the 'Diccionario de la Lengua Española', there are several other words with the same meaning:

They are synonymous, can be used interchangeably for the same purpose.

See the synonyms for sueldo: http://www.wordreference.com/sinonimos/sueldo

Although the topic of fixed expressions/collocations (such as asesino a sueldo) has been touched on to some degree already, I'll add a bit more here with some examples. What you see below are what appear to be more likely pairings. I'm not suggesting that you can't swap these words out with any of the other synonyms. That's probably just something you'll have to learn as you go and, as has already been mentioned, may depend on the region.

Before I get to the examples, I want to pose a question to anyone reading this, especially native English speakers. What's the difference between "salary" and "wage" in English? If you're not entirely sure, these two StackExchange threads might help:

I realize this is a StackExchange for those who want to learn about Spanish, but sometimes the differences between two words that exist in English are the same ones that exist in Spanish. This thread here is another example.

With that out of the way, let's get to the examples. As you will soon see, it appears that "salario" is the word of choice in many common phrases that can use both "salary" and "wage" in English: 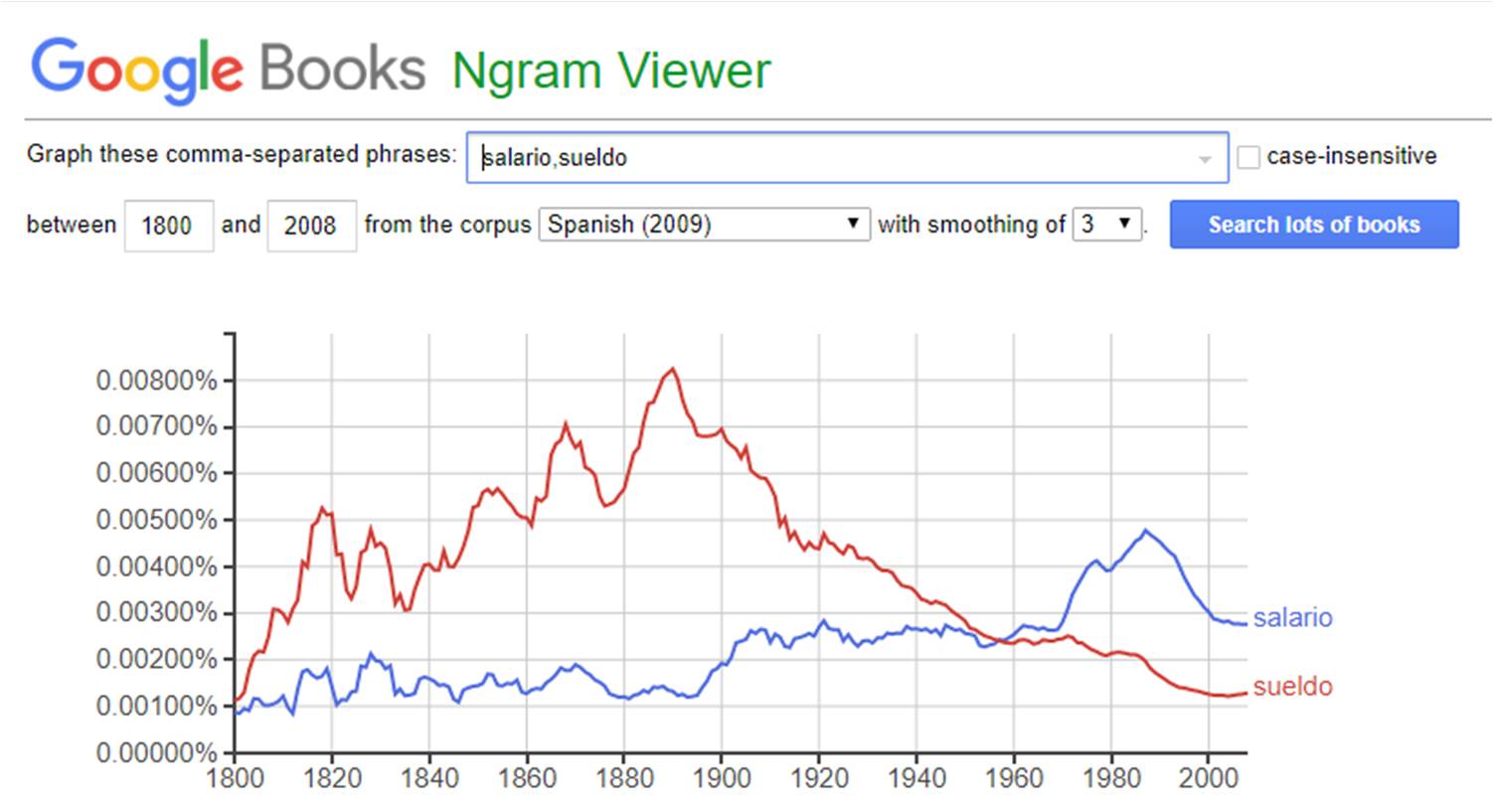 This observation that "salario" seems to be more commonly used than "sueldo" is reflective in this Google Ngram chart.

The following show you examples of common phrases that can use both "salario" and "sueldo" even if they might refer to something slightly different:

on a salary = con un salario/sueldo

And then sometimes you've got to use something slightly different altogether:

I think this is sometimes translated as "brecha de salario," but in practice, I don't really see much evidence that it is used nearly as often as "diferencia salarial."

And the last one I'll leave you with is this:

"Sueldo" and "salario" make me think of "solde" and "salaire" in French.

Solde would be used to mean "pay," but "salaire" is more for an employee's salary, for someone who receives an hourly rate. In French, "honoraire" is used for payment of professional services, something like "honorarium" in English. There is also the word "gages" in French, corresponding to "wages" in English but not used much.

Auto correct seems to be on with this site, unfortunately, so I hope my answer is clear in spite of this "technology".

These words are synonyms. The same meaning with just a subtle difference for salario is a more formal than sueldo.

2
In English, there is a difference between "envy" and "jealousy." Does this same distinction exist in Spanish?