I see evidence that "las fieras" is more frequent than "los fieros." If true, why?

The first time I encountered the word "fiero," it was in its plural feminine form. Because the text did not indicate that the group of "wild beasts" was a group composed of females, I must have simply thought that the base form for "wild beast" -- singular -- was feminine, and didn't think too much more about it. Later, I attempted to get audio for it through the site How to Pronounce since I did not find this word over at FORVO. [Correction: I did find it there but in the phrasal form "casa de fieras" and in the masculine singular form -- fiero -- but not simply "fieras."] When I searched for it at How to Pronounce, I was informed that the site did not have a definition for the word, so, as I am inclined to do, I went about adding a definition. The site asks you for a meaning if you have one and then asks for details such as "Grammar" (part of speech) and gender of the word (if it has one). Initially I thought to myself, Clearly this is feminine because it ends in -as, but then I wondered if this might be one of those epicene nouns or nouns that take both genders. As I typically do when such questions enter my mind, I consult with the Real Academia Española (RAE) and discovered that it lists "fiero, -a" as an entry for this word. I might get my wrists slapped for posting an image of the entry, but I want to spice this post up and show that "fieras" is in red.

The link to the above RAE entry is here: fiero, ra

In Wikipedia, I believe this indicates a subject of sorts, but one for which no article has been written. Does the RAE use similar color coding? Regardless, "fieras," in red, is not a hyperlink.

I then searched Google's Ngram for Spanish and discovered that, though both phrases -- las fieras and los fieros -- are on the decline, both are still in use. See the image below: 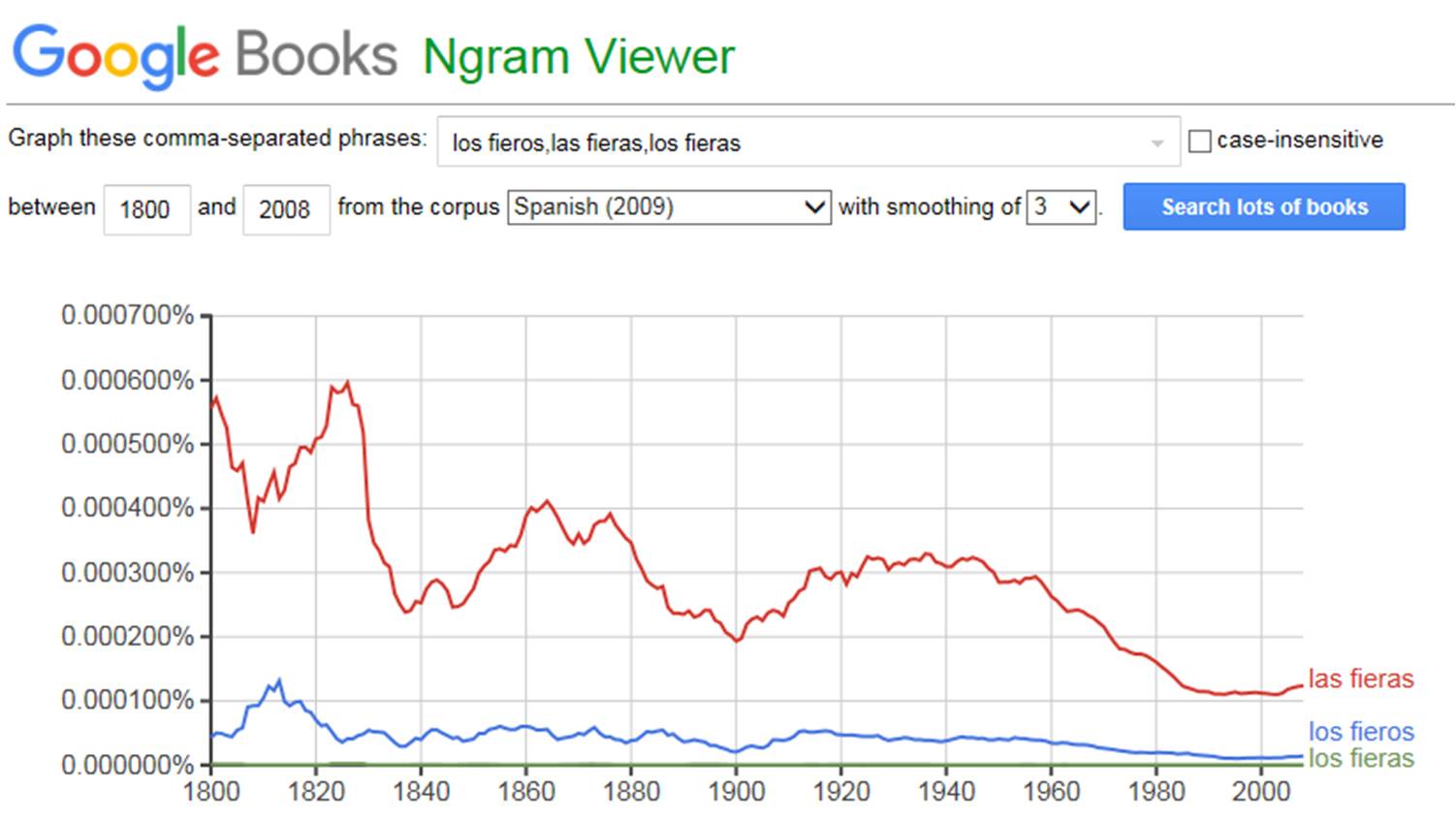 What the image above indicates to me is that "fieras" is not epicene in the plural (as I had been initially wondering). What it doesn't tell me, however, is why, in an animal world that is presumably roughly equal in terms of gender and certainly an environment where groups of animals of both genders would mingle together, does "las fieras" appear to be far more frequent than "los fieros?" Is there some sort of usage rule about "las fieras" versus "los fieros?" I tried searching for one online, but nothing, at least not in English, appeared to be addressing this word in terms of usage.

Lastly, I am going to provide a bit more context because I can foresee the question being asked. I came upon this word in an Aesop fable that had been translated into Spanish. The line that contains it is below:

You can see the rest of the fable by clicking on the link below:

You have the answer in both the entry of the RAE and the answer to a very recent question about the order of modifiers in Spanish.

First, fiero can be an adjective. See meanings starting with "adj." As an adjective, the position of the word will be generally after a noun, so the matches of "los fieros" will always be followed by a noun, and will not be all the matches of the expression, as the rest will be those that match "los" + noun + "fieros".

But in the RAE entry you can find that the word can also be a noun. It has a meaning as a masculine noun (7th one), but is very unfrequent. The rest of the meanings as a noun are feminine (fiera). The 8th one is the meaning we are interested in. So, fiera is basically any carnivorous animal that poses a threat to humans or to human's interests (farms, livestock). That is the meaning for the text you referenced. And, as the noun is feminine, it is used like that, unchanged no matter the sex of the animals.

As a note, a common adjective to apply to "fiera" with that meaning is "corrupia".

3
How do you describe the directional parts of an object?
8
Why is the word for a baby bottle's nipple the same word as that for a male's nipple?
4
How does one use a single adjective to describe two or more nouns of different genders?
3
If the grammatical gender of "archipiélago" is masculine, why do I see so many instances in which it is preceded by a feminine article?
4
Why does "(Hacerse la/una) paja" refer to masturbation?
9
If "mañana" is feminine, why do I see so many more instances of "mañana sería bueno" than "mañana sería buena"?
1
When and why did "a" begin to precede "menudo" to indicate that it means "often"?