How should I determine when to use the 4 main past tense forms of "to be" (the Imperfect and preterite forms of ser and estar)?

I've always struggled with the past tense forms of "to be". I have no issues determining whether to use ser or estar in present tense, but the added factors of imperfect vs preterite always throws me off.

This is how I see the uses of the forms.

Estaba: For describing an ongoing past tense, non-permanent/identity, event. "It was dark at the party".

Estuve: For describing an instantaneous, non-permanent/identity, event. "She was furious (at the moment)"

Era: For describing ongoing permanent characteristics or identities. "He was a happy man"

Fue: For describing instantaneous permanent characteristics or identities. I honestly have no idea when or how to use this properly in the "to be" sense (not the ir sense).

My ideas are likely faulty and totally wrong. Would anyone be able to correct them for me and help me to understand when to use each of the forms?

The use of ser/estar in the past is similar to how it is used in the present.

Okay, let me explain this:

"She was very pretty."

"Ella estaba muy bonita." -> Preterite / estar, she was pretty at one specific period of time, for example, at a party.

"Yo era gordo." -> Imperfect / ser, I am not talking about the present, I may or may not be fat now.

"Yo estaba gordo." -> Imperfect / estar, I am talking about a concrete state, such as, "In the 70's, I was fat." I am not expressing anything about the present.

"It was dark at the party."

"Estaba oscuro en la fiesta." -> Preterite / estar, I am talking about a story from the past that has ended or maybe the lights went on (so it is no longer dark).

"Estuvo oscuro en la fiesta." -> Imperfect / estar, I am not expressing anything. Maybe it is still dark or maybe it isn't.

"Era/fue oscuro en la fiesta." -> It doesn't make sense to use era/fue with oscuro; the quality of being light or dark is usually something that is in a fluctuating state as in, it may be dark now, but it won't be dark forever.

"Ella estuvo furiosa." -> Imperfect / estar, she was upset (this usually is used in an early-past, so she may be furious still).

"Ella era/fue furiosa." -> Doesn't make sense, furious isn't an identity, it's a state, a fluctuating situation. Nobody is furious forever.

"Él estaba/estuvo un hombre feliz." -> Never! You shouldn't use "estar" with "un/una." Anyway, happy is an identity, not a state.

Editor's note: While it is true that "happy" can be considered an "identity," it can also be a fluctuating condition. For example, someone can be a happy person in general or just happy at a particular moment in time for a particular reason. But, as you can see from the discussion in this thread here, there appears to be a lack of consensus on whether or not one should use "ser" or "estar" with "feliz." This graph from Google's Ngram Viewer, further supports that "estoy feliz" is being used by some: 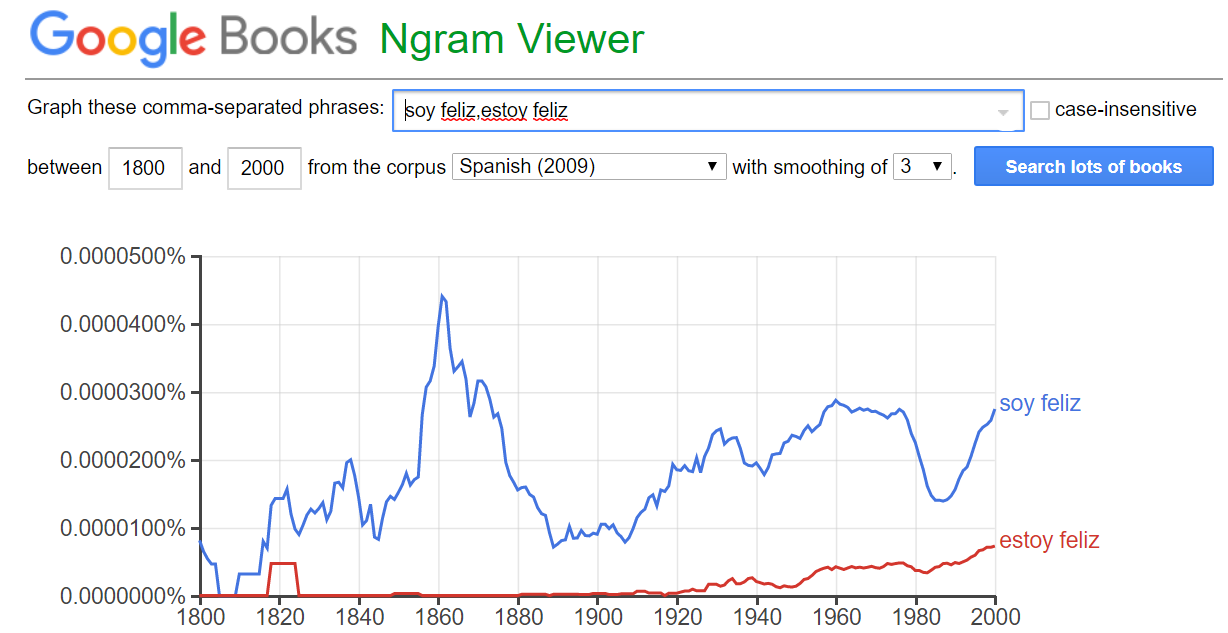 I did not do a thorough examination of these examples. In fact, I didn't conduct any at all, but while I have difficulty finding it natural that native Spanish speakers would have more reason to say I'm happy (as in I'm a happy person) over "I'm happy" (at this moment in time), I readily see a need to use "ser" for instances in which one might wish to express "I want to be happy" or "I want to learn to be happy." Typically, these last two sentiments are making reference to a permanent condition and not a singular, fleeting moment in time.

Simple answer (you can refine this later, when you are farther along):

If you're describing a scene or state of being, you use a descriptive past tense (estaba, era).

If you're talking about something completed, you use the preterite.

By the way, your idea of "estuve furiosa" doesn't work, in practice, because being furious is a state of being.

Not the answer you're looking for? Browse other questions tagged conjugación or ask your own question.

8
How do the second person present forms of *ser* divert from Latin?
5
Ambiguous -amos ending in all regular -ar verbs in presente and pretérito
0
When should a verb be conjugated irregularly in the preterite?