Why do several commercials/announcements put accents on their verbs?

I grew up in Costa Rica, so I can understand Spanish just fine. And yet, there is something I never quite got about the language. Here is an example of such thing in action: 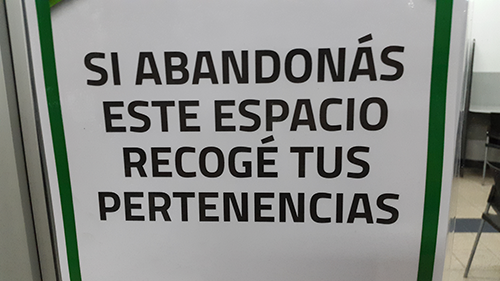 If you leave this area, take your belongings with you.

... It's the accents. As far as I am concerned, the use of accents in this and many other signs is completely unnecessary. The message could have been very well

The verbs abandonas and recoge don't have accents. They don't need accents.

Ever since I was a child I simply assumed that this was a style used for announcements/commercials/signs: a technique used for messages that are meant for the masses simply because they sound more appealing (for some reason).

So far, such assumption has worked for me: almost every time I see some sort of banner or announcement, they put accents on their verbs. Curiously, I have a feeling that government-issued messages don't use this, so I'm guessing that it is not even a formal thing.

Those tittles are there to mark the Argentinian (and around) pronunciation, where 2nd person singular is actually pronounced like that. You can even check here: http://lema.rae.es/drae2001/srv/search?id=OwNFUpkBeVcRjf05c4tK

Note that in English, the word tittle refers to the dot above an i or j.

The accents are there because the verb isn't conjugated for tú (or usted), rather vos. While most people think of Argentina and Uruguay as the main places to hear it, it's actually used pretty extensively across Latin America, but it it's not considered generally part of the prestige register. Its conjugations vary a bit depending on country, though the most common (=Argentinean) imperative forms are -á (-ar), -é (-er), and -í (-ir) with no irregulars except for ir which is defective and replaced with andá (from andar)

I actually find any sign with conjugated verbs to feel less formal. Personally, I would've written the sign "Recoger sus pertenencias al abandonar el espacio" (and that's what I'd expect for a government sign, because omitting the conjugation makes it a bit more neutral in whom it's directed to).

Especially, though, if a sign is conjugated in 2nd person informal, it's just designed to be a bit friendlier of a reminder (the infinitive version would sound a bit more demanding/harsh, IMO).

The verb forms in the sign reflect the actual pronunciation of verbs using the voseo forms, as found most characteristically in Argentina, Uruguay and Paraguay, but also in many other places in Latin America. In some regions voseo is considered too informal, but it's the standard in Argentina in most kinds of communication, except the most formal ones. Check out, for example, the homepage of the Argentine national government (or archived in case the link goes dead). For really formal second-person interactions, government and private companies will generally use usted.

Not the answer you're looking for? Browse other questions tagged verbos estilo or ask your own question.

26
I forgot how to say "I forgot"
3
se pronoun in "no fault constructions"
4
Why does "mostrar a" mean "to show" and not "to show to"?
2
Where else 'Se' in comerse will be used
4
Why is the past (passive) participle used in some apparently active constructions?
5
Ambiguous -amos ending in all regular -ar verbs in presente and pretérito
5
Is comerse required when used with a determinate amount?
1
"No hay miedo de que se dé ese a quien van a prender"
4
How come I can't find some reflexive verbs like decirse, odiarse and mentirse in the dictionary?