Difference between "Que" and "cual" [duplicate]

I came to know from the duolingo application that Que means what. And is an interrogative sentence:

It translates to Spanish as

The sentence "¿Qué es la pregunta?" does not make sense in Spanish. It can be understood as "what is the definition of the question?", but grammatically sounds bad.

Here I paste a graph showing the difference between qué and cuál. (I don't know the source, only found among my docs). 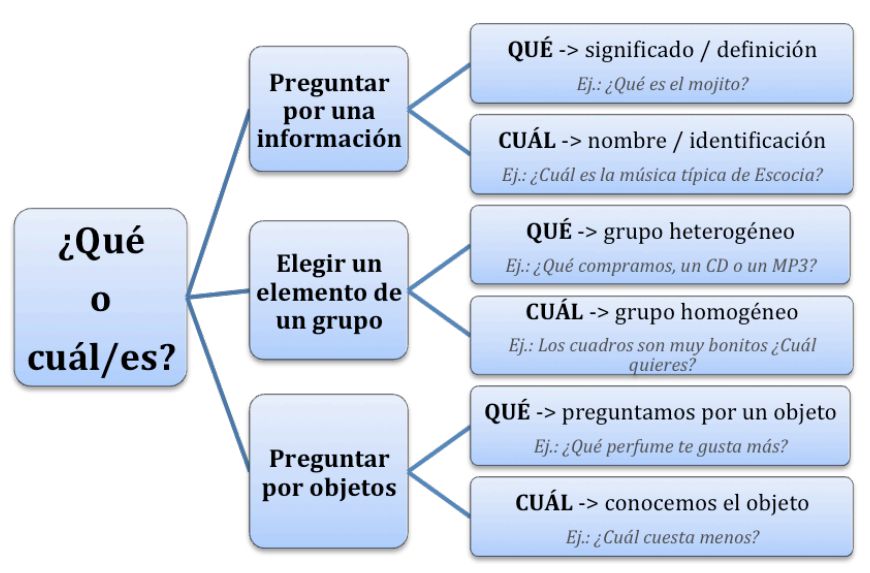 It can be hard to pick up on the nuances of this issue. Cuál means 'Which' (as in which one?), and is usually the right word to use when followed by 'to be', as in ¿Cuál es la pregunta? Qué is used when immediately followed by the noun, as in ¿Qué pregunta tienes?

Qué es la pregunta? In other cases could have sense, but not here. For example: What is this? Would be: Qué es esto? ("Cuál es esto" doesn't exist)

Translated in English would be as you say "What is the question" both, with the difference that the first has sense and the second doesn't.

Not the answer you're looking for? Browse other questions tagged gramática preguntas or ask your own question.

10
"Soy yo el que vine..." or "soy yo el que vino..."?
3
"echado" vs "echando"
4
Why is there an interrogative pronoun in this sentence which is not a question?
2
Target word for "para que"
1
How does "presumir" work in this sentence?
1
The distinction between past and present tense in the following sentence
1
Why the extra 'se' in 'se espera se que supere'?
4
Spanish word order and use of 'quería'
3
What is the difference between '¿Tienes algún amigo que hable español?' and '¿Tienes un amigo que hable español?'
4
¿Que has perdido qué?