Which feature does each of them have? Or do they mostly depend on regional traditions?

I think some of them depend on regional variations (-iño for example is something that you would hear in the north of Spain, influenced by Galician speakers).

Also -illo may depict things that are smaller than -ito (cucharita vs. cucharilla) but there is not a definitive rule about this.

The differences and connotations between them may be so fuzzy that the context would give you more information than the suffix itself and is not possible to get a proper, definitive list of the variations of significance and connotations of each one of the suffixes.

-illo and -cillo may be less common due to regional differences. Some Spanish dialects may be less prone to use certain suffixes (making even more difficult to get a definitive list of the exact connotation of a diminutive or its divergence/variance from others).

This image shows the common diminutive suffixes used in different regions of Spain (and Portugal): 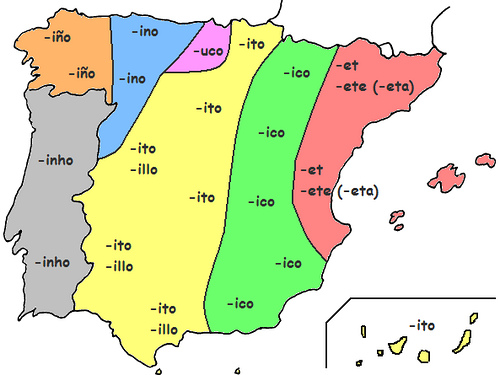 There are others, but these are even less common (see the links at the bottom).

As Diego says, however, the specific meaning is often context-specific, due to regionalisms, different productivity of different suffixes, some words having lexicalised the suffix etc.

Not the answer you're looking for? Browse other questions tagged sufijos or ask your own question.

3
Suffixes used to transform an adjective into a noun
5
What suffixes are used to indicate jobs?
4
Combining diminutive/augmentative suffixes