What is the difference between verduras and vegetales? In what situations can one be used as a translation for "vegetables" and the other cannot?

Vegetal (here the new definition according to RAE) is either:

Verdura, on the other hand, refers to edible plants, specially those with green leaves.

In Spanish (in Spain, at least) we make a distinction between hortaliza (any vegetable, in the 2nd meaning of vegetable as a noun in the previous link) and verdura, which are a subset of hortaliza.

From the RAE Vegetal and Verdura.

My answer can't compete with those already given, but the first thing that came to mind when I read this question was something I read a while back that mentioned "verdura" is the word used for "vegetable" in Spain and "vegetal" is used in Latin America.

I didn't find what I remembered having read so long ago, but I did come across this thread here from Span¡shD!ct:

Difference between VERDURAS and VEGETALES?

It supports what I remember reading, in places, but also adds additional information. I realize Span¡shD!ct is not the RAE, but the RAE is referred to repeatedly throughout the thread.

Since having written the above, I’ve been wondering how best to say something like, “I like to eat vegetables.” Should I use “vegetales” or “verduras?” So I ran a couple of phrases through Google’s Ngram. The results were as follows:

As you can see, in general, “comer verduras” is more common, but I wondered if that was dependent upon region, so I went to Google’s Advanced Search to run these same phrases through a search filtered by country and language (Spanish). What you see below is how many more times “comer verduras” was found on web pages than “comer vegetales.” Numbers below 1.00 indicate the reverse was true. 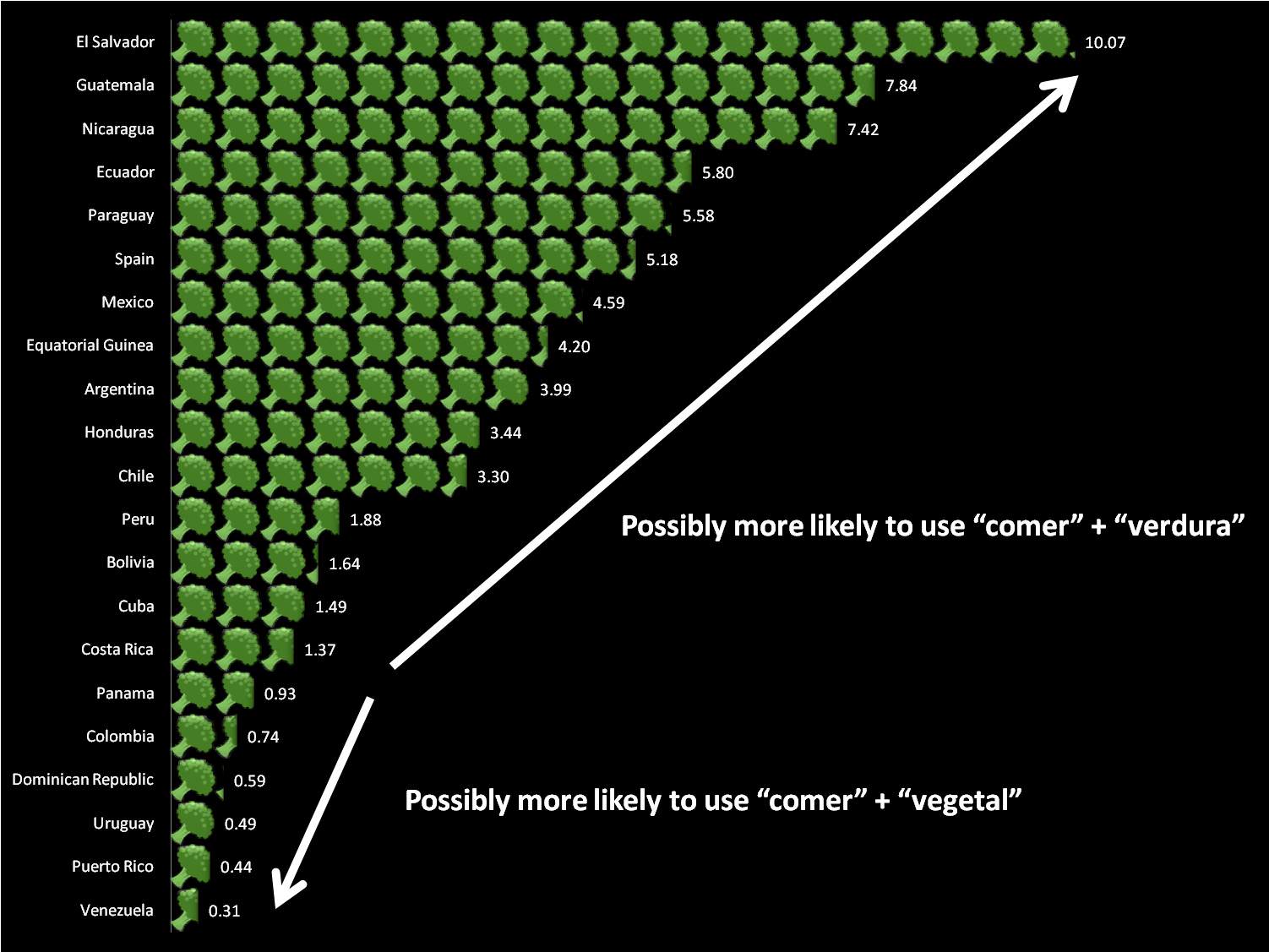 So, if you really like to eat vegetables and you want to let someone know, go with

Now, apart from pairing “comer” with “vegetal” or “verdura,” there appear to be other common pairings. When word pairings are common enough, we call them collocations in English. I don’t know if the trends I saw with “vegetal” and “verdura” were common enough to be called collocations, but here is what I found (in Spanish newspapers, blogs, and the like). Translations were either retrieved or confirmed with Reverso.

origen vegetal (plant or vegetable origin)
Keep in mind that, unless you’re referring to a specific plant (where “el origen de la planta” might be more appropriate), this is really how you would say “plant origin” in Spanish.

Other words that pair with "vegetal":

Some common phrases in English appear to just as easily be translated with either “vegetal,” “verdura,” or “hortaliza.” Below, I've listed some examples, with what appear to be the most common listed first (as indicated by Google's Ngram). (The English is in alphabetical order.) You will notice that in each combination listed below, "verduras" is more common than the other words for "vegetables."

vegetable juice: jugo de verduras*
*The only phrase that surfaced in a search using Google’s Ngram. (The others I searched for were: jugo de vegetales, zumo de verduras/vegetales, and jugo/zumo de hortalizas.) I found it interesting that only "jugo de verduras" showed up in a Google Ngram search since I had thought "zumo" was the word for juice in Spain. (Oddly enough, when I expanded the search to just a regular Google search I found more pages for "jugo de verduras" with a Spain and Spanish filter than for "zumo de verduras" (1.24 times as many), but when I add the "News" filter, "zumo de verduras" clearly comes out ahead. (With this additional filter, you'll find three times as many pages containing the phrase "zumo de verduras.") For an example, check out this recent news article: “10 trucos para hacer el zumo de verduras y frutas más sano.”) Such variations are likely to be found throughout the Spanish-speaking world and not just between Spain and Latin America. The images below clearly indicate that you'll find a variety of combinations in real life. Here are a few: 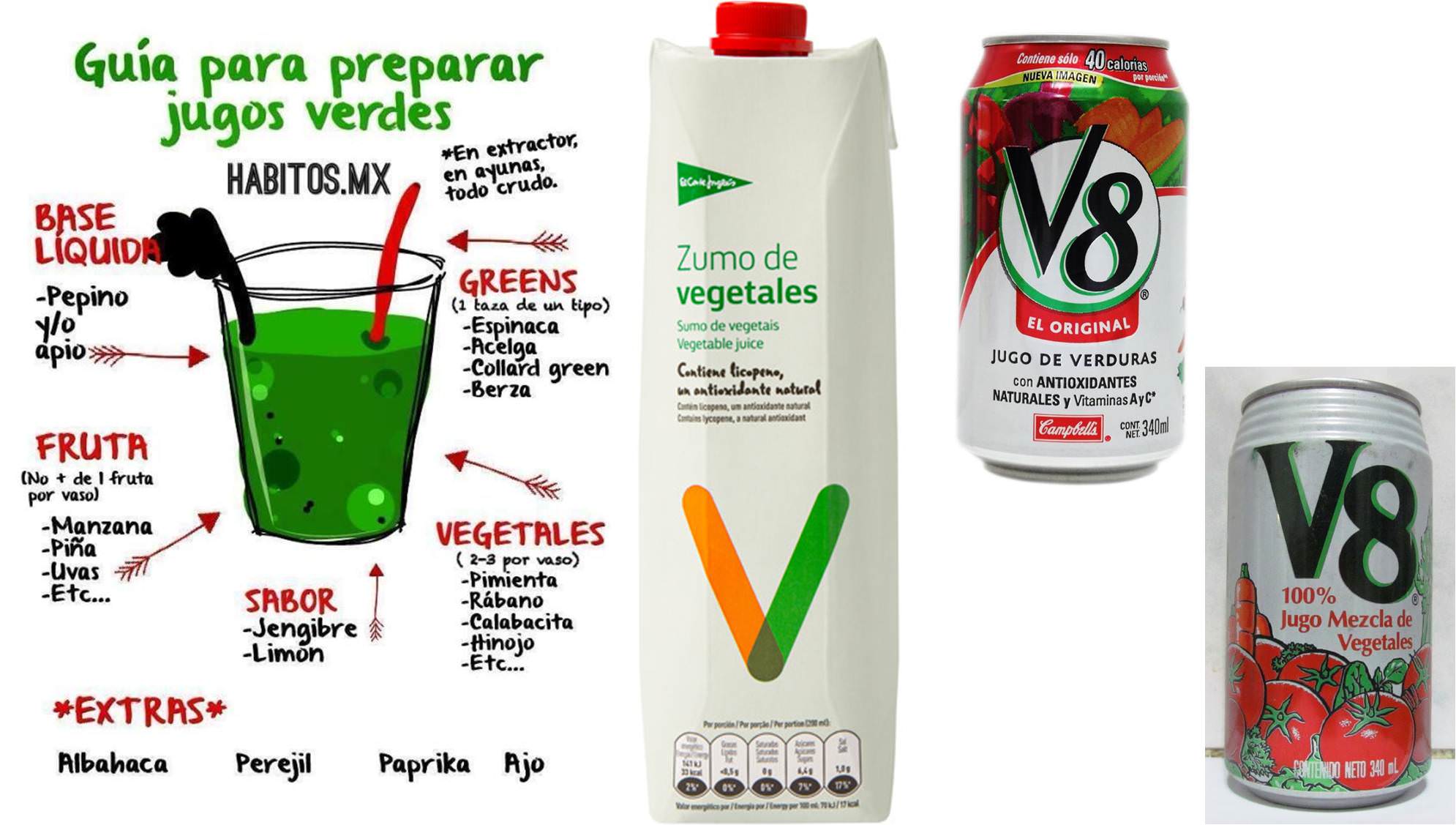 I didn't investigate where each of the images above came from, but I did notice that the can of V-8 — the one that says "jugo de verduras" — is Mexican.

A couple of more "mixed" pairings, but as with the rest in this section, "verduras" seems to be more common:

I don’t have a set phrase in English for this last set of images I’ll show you (basically they are newer versions of the triangular-shaped guide known as the "food pyramid"), but clearly, you will find all sorts of places where “verduras” is used instead of “vegetales” and vice versa.

And finally, I’ll just close with a few sentence examples with the three words I’ve focused on in this answer — vegetal, verdura, hortaliza. Inevitably, you will encounter many more as you continue your study of Spanish. The ones I’ve included below can show you how interchangeable some of them can be. They come from real Spanish newspapers or blogs and to make it even more of a challenge, I’ve blanked the word out so you can guess which word was used. (To get the answer, either visit the link or see the answer key below.) Translations are either my own or my own with a little help from Reverso.

Hint #1: Each word — vegetal, verdura, hortaliza — is used at least twice.
Hint #2: Pay attention to gender clues. I didn't strip them all out and what remains may help you narrow it down.

And if you’re not thoroughly confused yet about which one of these words for vegetable to use, I’ll leave you with this one last example here:

Not the answer you're looking for? Browse other questions tagged traducción selección-de-palabras sinónimos vocabulario or ask your own question.

4
Difference between vegetales and verduras?

0
caja vs. cajón vs. estuche
1
Efficient: eficiente vs. eficaz
3
shy: tímido vs. reservado vs. vergonzoso vs. penoso
1
plan: plano vs. plan
3
Translation of "real estate"
2
What is the difference between "por medio de" and "a través de"?
1
When should one use "para" for the English word "to"?
2
Vegetables in Spanish